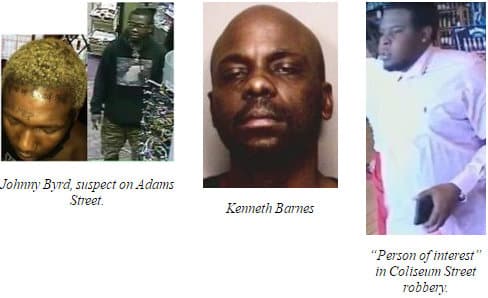 New Orleans police are hoping the public can help find a suspect investigators identified in a September robbery on Adams Street, a suspect in a rash of robberies at Carrollton busiensses, and help identify a “person of interest” in last week’s robbery on Coliseum Street, authorities said.

Johnny Byrd, 20, has been identified as one of the assailants in the Sept. 11 armed robbery near Adams and Hickory streets in the Carrollton area, according to a NOPD report. The victim, a Tulane student in his early 20s, was walking on Adams around 4 a.m. when he saw two men following a group of people, and when the men saw him, they turned around and confronted him with a handgun, taking his wallet and iPhone, police said at the time.

“Byrd is described as being 5-foot-6, weighing 182 pounds, with short hair or a shaved head,” according to the NOPD report. “He has “Alive or Dead” with a picture of a fly tattooed across his forehead and “Why me?” over his right eyebrow. He is also known to wear glasses.”

Kenneth Barnes, 47, has been identified in four robberies of Carrollton businesses, according to police: at the Smoothie King at 224 North Carrollton Avenue on March 1, Rite Aid at 1133 South Carrollton on March 2; Maple Street Bookstore at 7529 Maple Street, and Rite Aid at 7133 St. Charles Avenue on Sept. 29. He is also wanted on seven other arrest warrants, the report notes.

In the Lower Garden District case, the victim was in the 1300 block of Coliseum Street on Tuesday, Oct. 11, when he was confronted by a man with gun who took his belongings, police said. Investigators are now looking for a man seen driving a white Dodge Challenger with racing stripes down the side, because they believe he “has important information regarding this incident,” the report in this case states.

Anyone who can help find Byrd in the Adams Street case or Barnes in the other cases is urged to call the NOPD Second District station at 658-6020, and anyone who can identify the person of interest in the Coliseum Street robbery should call the NOPD Sixth District station at 658-6060. Anyone with information in either case can also call CrimeStoppers at 822-1111 to leave an anonymous tip that could be eligible for a cash reward.