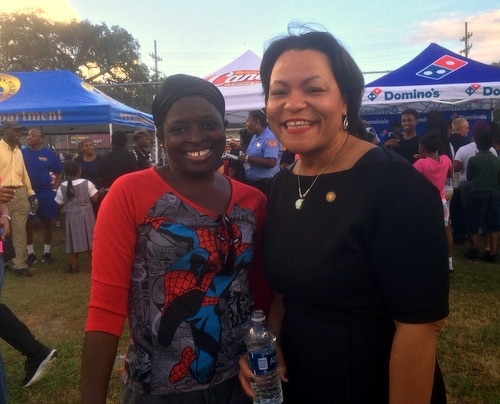 City Councilwoman LaToya Cantrell poses with a constituent during last week’s National Night Out Against Crime events. (photo by Danae Columbus for UptownMessenger.com)

“I am ready to lead this city,” proclaimed District B Councilmember LaToya Cantrell last Friday night. Though billed as a Halloween party at the French Quarter home of trial lawyer Darleen Jacobs, there was some pretty serious politicking going on as Cantrell announced she would seek “higher office” without specifying whether she will qualify for council at large or mayor.

Cantrell’s extemporaneous remarks — filled with many of her characteristic “LaToyaisms” — were greeted with great fanfare by donors, family and friends. Cantrell’s work ethic developed from the “tumultuous times” in her youth being raised by a single mom in Los Angeles who was on welfare. When Cantrell talks about poverty and how families are impacted by a lack of available educations resources, affordable housing and the country’s drug epidemic, she speaks from the heart.

Cantrell feels a deep obligation to serve the community and uplift people. “Once you get to stand up, you have a responsibility to help another stand,” she said. Cantrell came to New Orleans 30 years ago and rode public transit to attend Xavier. “I saw depravity in the city first hand every day,” Cantrell explained.

Cantrell considers the city’s popular smoking ban and her work in addressing affordable housing issues as her top accomplishments. “I am always striving to create new partnerships and win-win situations for the community.”

Cantrell is appreciative of all the outside investment that has come to New Orleans since Hurricane Katrina but realizes that not every neighborhood has been part of the growth. “We must focus on the fundamental things we can all agree upon and make the necessary changes to address those needs,” which includes she says jobs, a living wage, access to real transportation for residents to get back and forth to work, and real incentives for people to build on vacant lots.

“We cannot be a city divided. We must be a city of character and roll up our sleeves to do the work necessary. I will build bridges so that everyone feels a part of New Orleans’ success. Together, we are great and we deserve it,” Cantrell concluded.

Cantrell says she has time to watch the field of candidates emerge before making a final decision on whether she will run for mayor or council at large. That field should be more clear by Ash Wednesday.

Crescent City native Suzie Montero, whose late father Wilson Montero was one of New Orleans’ premiere criminal defense attorneys and former partner of the late great Jack Martzell, will qualify for Civil District Court if Judge Regina Bartholomew Woods wins her race for 4th Circuit Court of Appeal. The election should be set for March, 2017.

“I love the law. I’ve done a lot of courtroom work and I enjoy hearing good lawyers argue their cases,” said Montero, who graduated from Southern Methodist University and LSU Law School. “I love rule day and hearing different sides of each argument.”

Montero previously worked at Martsell and Bickford, Sessions Fishman and is now of counsel with Chip Forstall where she handles his litigation. “I am exclusively a litigator and have practiced in district, state and federal court,” Montero explained. Montero also has a degree in psychology and worked at Jo Ellen Smith Hospital before attending LSU.

Montero is married to a female coach at Tulane University, but said she does not expect that to become an issue for New Orleasn voters. “Everyone in the legal community knows I am gay but I am not running as a gay candidate,” she said. “Being elected to the bench will allow me to continue doing what I love from a different perspective.”

Obviously Inspector General Ed Quatrevaux has become more comfortable with the proposed charter change amendment which Councilmember Jared Brossett is proudly calling “his” amendment. Quatrevaux has produced an informational (only) video now airing on You Tube which explains how the amendment will create financial and operational independence for the three agencies – the OIG, the Police Monitor and the Ethics Review Board.

Coroner Jeffrey Rouse has done an excellent job of creating a more modern and transparent department. Though no opponents have surfaced for the 2017 election cycle, Rouse continues to raise funds each year through the Coroner’s Ball which will be held Friday, October 28 at the Benachi House at 2257 Bayou Road. The event is black tie optional and masquerade is encouraged.

LOUIS A MARTINET SOCIETY INVITES CITIZENS TO JOIN THEM AT POLLS

The Louis A. Martinet Society has created a “Don’t Boo, Vote” initiative and is encouraging like-minded citizens to gather on Saturday, 1 p.m., at City Hall for a group vote-in. “Grab one, two, three or more friend and vote with us.” Early voting ends Tuesday, November 1.

Danae Columbus has had a 30-year career in public relations, including stints at City Hall, the Dock Board and the Orleans Parish School Board. Among the recent candidates who have been represented by her public relations firm are Foster Campbell, Regina Bartholomew, City Council members Stacy Head and Jared Brossett, Lt. Gov. Jay Dardenne, former Sheriff Charles Foti and former Councilwoman Cynthia Hedge-Morrell.