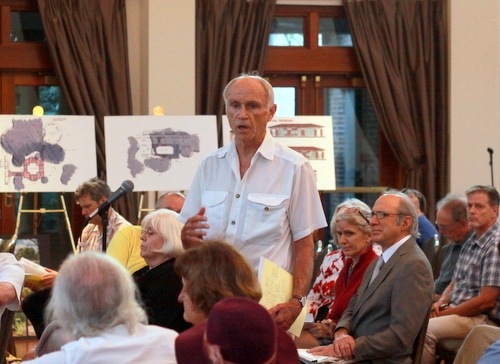 Oliver Houck, a Tulane University law professor noted for his work on environmental protection, speaks at a meeting of the Audubon Commission on Tuesday evening. (Robert Morris, UptownMessenger.com)

Neighbors who frequent Audubon Park expressed two top priorities on Tuesday night — a short-term goal of improving the bathrooms on The Fly, and a long-term goal of creating a community-driven master plan to guide the future of the popular recreation space.

Meanwhile, they also learned the latest plans for the reconstruction of Magazine Street through the area — currently scheduled to begin some time in 2017.

The Audubon Commission has two projects moving into place this spring and summer, officials told the audience at a community meeting Tuesday night. The first project, which has already begun, is an upgrade of all the benches throughout the park, giving them a consistent look and replacing those that have fallen into disrepair. Starting in July, the park will begin resurfacing the main jogging and bike path, repairing cracks, reinforcing the edges that fade into the grass and improving the stripes that separate the walking and cycling lanes.

Meanwhile, the city is also planning a major $17 million “full depth” reconstruction of Magazine Street from Nashville Avenue to Leake Avenue, slated to begin next year. The asphalt will be removed, all underground utilities and drainage will be replaced and the street will be repaved, essentially rebuilding the entire road, said Cheryn Robles of the city Department of Public Works. Historic street-name tiles will be restored, sidewalks will be replaced and new striping will add symbols indicating that the lane should be shared with bicycles, though the width of the road itself will remain the same.

The first section to begin will be that from Broadway Street to East Drive near the downtown entrance to the park, starting in fall 2017. The section from East Drive to Nashville Avenue is expected to start about a year later, but officials say that two-way traffic will be maintained throughout the project by working on one side of the street, then the other.

“We recognize there is very serious construction fatigue in this area,” Robles said.

Neighborhood activist Drew Ward asked the city to consider saving or restoring the stone pavers that are still underneath the asphalt. Robles said the project doesn’t have funding for that kind of historic restoration, and those kinds of surfaces are no longer considered strong enough for driving lanes.

Beyond those immediate plans, the remaining projects pending before the Audubon Commission are all somewhat conceptual, officials said, a sort of wishlist of improvements. The Commission received a $523,000 outlay for repaving, lighting or other improvements to The Fly (though it had requested $3.2 million), and part of its work is to determine how best to apply that. The commission has also considered improvements to the playgrounds and shelters on St. Charles Avenue, Magazine, and Walnut Street.

“These are conceptual,” said Ashley McClaran, vice president for construction with Audubon Nature Institute. “None of this is set in stone.”

In the near future, residents were fairly unanimous in saying the most important priority on The Fly was replacing the run-down bathrooms. But of the conceptual projects, the only one that drew support from the large audience is a master plan guiding all future development at the park — and they questioned the role that the old master plan started prior to Hurricane Katrina will play.

Audubon Commission chair Kelly Duncan said the goal is for the master plan to be created in in 2017. The old plan will likely be only a starting point, he said, but that much of what’s shown in in it will be removed.

“What’s in that plan today won’t be the final plan,” Duncan said. “There’s certain things in there that simply won’t occur.”

Activist Adrienne Petrosini pointed at an area of The Fly marked off for a project called “The Landing” that was the subject of much consternation during the debate over a proposed Carrollton Boosters soccer complex, but Audubon CEO Ron Forman specifically said that is no longer part of future considerations.

“The Landing part of the project — that will not be built,” said CEO Ron Forman.

Oliver Houck, a Tulane professor who specializes in issues of environmental protection, urged the commission to consider starting the master plan over from the beginning. Water management and the preservation of green spaces have become such higher priorities over the last decade, he said, that they should form the foundational principle of the new plan.

“Everybody’s in that mode, and it’s a new mode,” Houck said.

Many of the neighbors went on to elaborate ideas they hope will be in the Master Plan:

Several people simply asked the Commission to promise to protect the view of the river for the public. Attorney Shannon Sims said that “many world class cities are moving in a direction of keeping construction off the waterfront,” and urged the Audubon Commission to follow their lead.

“We are doing the best to keep the little green space we do have,” agreed resident Isabel Reynolds. “City Park is gorgeous, but this is so easy for all of us to use and enjoy. Please don’t fence off any more of the Riverview.”

Architect David Keiffer, a vocal critic of the proposals for development of the soccer field, urged the Commission to ensure that the master plan is truly a collaborative process.

“If you do it right, that will be the touchstone for everything else that you do,” Keiffer said.

2 Responses to “Better bathrooms at The Fly, master plan for Audubon Park are residents’ top priorities”