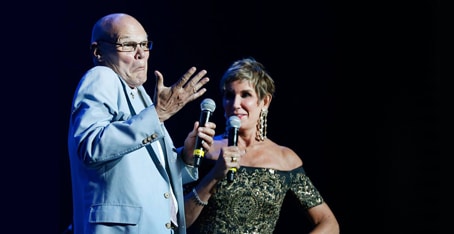 Political consultants James Carville and Mary Matalin will discuss bizarre drama of the 2016 Presidential election in a forum Wednesday night moderated by Gambit publisher Clancy DuBos and hosted by the Loyola University Institute of Politics.

The event begins at 7:30 p.m. Wednesday, March 30, in Nunemaker Auditorium in Monroe Hall. It is free and open to anyone interested, but seating is limited.

Presented by Loyola’s Institute of Politics, the talk is the seventh annual Ed Renwick Lecture Series and is free and open to the public. But get there early: Seating is limited and seats will go first-come, first-serve to the first 350 guests to arrive. After that, the event will be standing-room only. A reception will follow the program in the new Nunemaker Auditorium lobby.

“The 2016 Presidential Election is one of the most widely watched elections in history, as well as one of the most polarizing and dramatic,” said Loyola University New Orleans President the Rev. Kevin Wm. Wildes, S.J. “We are pleased to have two of the nation’s top political strategists visit Loyola to shed light on the issues and bring us perspectives from both sides of the aisle.”

Carville is America’s best-known Democratic political consultant. His long list of electoral successes evidences a knack for steering overlooked campaigns to unexpected landslide victories and for re-making political underdogs into upset winners. His most prominent victory was in 1992 when he helped William Jefferson Clinton win the Presidency. In recent years, Carville has not been a paid political consultant for any domestic politicians or candidates for office, instead focusing on campaigns in more than 20 countries around the globe.

Carville has authored or co-authored 8 New York Times best sellers. His most recent book co-authored with pollster and friend Stan Greenberg It’s The Middle Class Stupid! was released in 2012. Carville is a frequent political commentator and contributor on This Week with George Stephanopoulos. He also serves as a Professor of Practice at Tulane University in New Orleans.

A member of Loyola University New Orleans Board of Trustees, Matalin is one of the most celebrated and popular conservative voices in America. She served under President Ronald Reagan; made her mark as President George H.W. Bush’s campaign director; and served as both assistant to President George W. Bush and assistant and counselor to Vice President Richard “Dick” Cheney. Today, she is an author, television and radio host, and widely sought-after political contributor, pundit and public speaker.

Matalin was a founding co-host of CNBC’s Washington-based political weeknight talk show Equal Time, named “the best talk show on television” by Knight Ridder News Service. She has made numerous appearances on NBC’s Meet the Press and the popular HBO series K-Street; she served as host of CNN’s critically acclaimed debate show, Crossfire. The Mary Matalin Show, a three-hour afternoon radio program on the CBS Talk Radio Network, was named one of “The 100 Most Important Talk Show Hosts in America” by Talkers Magazine in 1996, 1997 and 1998. Today, Matalin co-hosts the nationally-syndicated radio program Both Sides Now, broadcast on more than 100 radio stations across the country.

Together, with her husband James Carville, Matalin co-authored the best-selling political campaign book All’s Fair: Love, War, and Running for President, named one of the top five best books on public relations by The Wall Street Journal. The pair recently returned to the New York Times best seller list with their newest book Love and War: 20 Years, 3 Presidents, 2 Daughters, One Louisiana Home. Matalin also penned Letters to My Daughters, a series of short missives for her own daughters. The book made The New York Times and the Washington Post best-seller lists, was named a Book of the Month Club selection, and was chosen for a condensed version by Reader’s Digest.