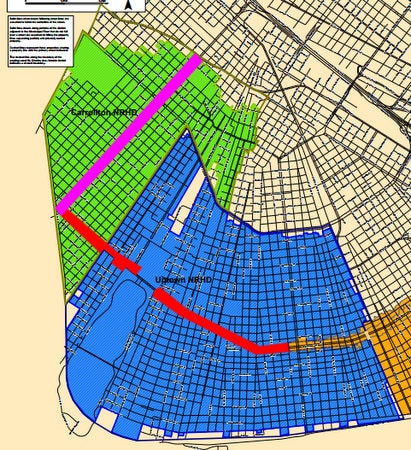 Most of Uptown New Orleans between South Claiborne Avenue or Earhart Boulevard and the river should receive historic-district protection against demolitions — with much stricter standards on St. Charles and Carrollton avenues, according to a unanimous recommendation Wednesday night by a committee of residents appointed by Mayor Mitch Landrieu.

The vote by the members of the “Uptown/Carrollton Study Committee” is only the first step in a process that will play out in the months to come before the City Planning Commission and the City Council, officials explained at Wednesday night’s meeting. But the recommendation also gives a concrete starting point to the coming debate about which areas of Uptown need historic protection, and how much.

“This is not the last step in the process,” said Eleanor Burke, deputy director of the HDLC. “In fact, it’s sort of the beginning.”

The proposal, recommended by the Historic District Landmarks Commission staff and ultimately approved by the study committee, includes several components:

The proposed boundaries generally follow those of the Uptown and Carrollton National Register Historic Districts, but have been “smoothed out” so they will be easier for the public to understand, explained Elliot Perkins, director of the HDLC.

Demolitions in most of the Uptown area are already governed by an entity called the Neighborhood Conservation District Advisory Committee. It is limited to making recommendations for City Council approval, however, whereas the HDLC decisions are final — unless someone chooses to appeal them to the City Council. City officials generally believe that having a single entity governing demolitions that can make up-or-down decisions is more efficient for residents than two agencies, one of which is necessarily a two-step process.

The NCDAC didn’t have its own staff, as it was comprised of members of a number of city agencies and departments. Meanwhile, the HDLC would likely hire one additional person to help with the increased workload of the new districts, but “we probably need them anyway,” Perkins said.

The study committee members had a series of clarifying questions for the staff, but generally agreed with the staff recommendations and offered little in the way of opinions of their own. The crowd of neighborhood representatives filling the VFW Post, however, did have a number of comments.

In a comment later seconded by several audience members, historian Stephanie Bruno said she would support some control over new construction in Uptown as well. She also applauded the recommendation for full control over the upper portion of St. Charles Avenue, mirroring the protection over the older, lower sections.

“Ours is still very very iconic,” Bruno said of the upper parts of St. Charles Avenue. “It’s what people see and associate with our city, and I think it’s important to preserve that.”

Jay Seastrunk, a board member of the Louisiana Landmarks Society, said he wished there was a sort of middle ground to full control — where the HDLC had review over the facades of buildings, but not necessarily every element visible from the street.

“I see some terrible things being built that don’t have proportion. An effort to protect facades is something a lot of people might be open to,” Seastrunk said — rather than the kind of tight control over window materials that many people associate with the HDLC.

Betsy Stout, a former Louisiana Landmarks Society board member, said she felt the more limited control over demolitions is a better role for the HDLC.

“I would not be in favor of full control. I don’t think HDLC has resources to do that properly,” Stout said. “But I think reviewing the demolitions is a good thing.”

Robert Hessinger of the St. Charles Avenue Association said his organization supported the full control proposed by the staff, even though he was personally surprised that the members wanted to give the city that much oversight over their properties. In the Twinbrook Neighborhood Association, president Jean Landry said her board hadn’t had made a decision yet, but she personally agreed with Bruno that some control over new construction in historic areas is needed.

John McKnight of Gert Town noted that the Earhart Boulevard boundary of the Carrollton district runs right through his neighborhood, and said he felt his community had been left out of the discussion.

“I think Mayor Landrieu should have put a representative of my district on this board. Do y’all come to Gert Town?” McKnight asked. “A lot of things in this area are being overlooked by somebody. We’re going to lose our heritage back there.”

Lauren Hotard said the HDLC staff might provide more professionalism to the demolition-review process. When her family sought to demolish a blighted home they bought from a neighbor, she said, the NCDAC board was ignoring her structural engineer’s reports and the city’s own code-enforcement inspectors and making judgments based on photos of the property taken from the street.

“In our experience the term ‘review’ was a little gray,” Hotard said. “Never once did anyone from NCDAC actually come out to our property and look at it.”

Tom Longmire attended the meeting to call the entire process a farce, since the HDLC had voted to allow the removal of three monuments to Confederate leaders and one to a white-supremacist insurrection.

“What is the point of establishing a historic district if we’re not going to preserve history?” Longmire asked. “The HDLC did not do that with the monuments. It was wrong.”

Tim Garrett of Marlyville asked if a neighborhood or individual property could request not to be in the district. Perkins replied that the proposed boundaries could be easily altered to include or exclude any neighborhood from the district by either the City Planning Commission or City Council, but that gerrymandering the district lines around single properties would generally be frowned upon.

(In a separate process, any historically significant property can be individually named a landmark to receive HDLC protection, such as the former New Orleans Adolescent Hospital after its purchase by Children’s Hospital, the staff noted — but that’s can happen anywhere in the city, regardless of district boundaries.)

Wednesday’s vote takes the issue out of the hands of the committee and sends it to the City Planning Commission for review. From there, the City Council will have the final decision — and public input will be taken at both of those points as well.

“At every level, there are people listening,” Perkins said.