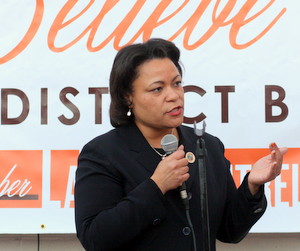 As the New Orleans City Council prepares to move into what was expected to be the final round of discussions on a plan to remove three monuments to Confederate leaders and one to a white-supremacist uprising against the Reconstruction government, City Councilwoman LaToya Cantrell announced that she will oppose the plan because it was “thrust upon the city” from above.

A more nuanced discussion was needed, Cantrell said, that evaluated each monument individually as well as considering others symbols not originally proposed by Mayor Mitch Landrieu. A more substantially inclusive discussion would have ended with a more united decision, Cantrell said.

To read Cantrell’s statement in full, see below:

I would like to clarify any speculation from the public at large about my position on the monuments. I am opposed to the current ordinance before Council that will remove four of the multiple Confederate monuments and memorials of our city.  The reason I am opposed is because it was not a community driven process based on the concerns of citizens.  This idea was thrust upon the City and the Council from the top down after it was created by a small, select group of individuals.

There was no movement rising up to demand this action.  There was no willingness to take into account people’s outrage about other symbols of racism not included in this ordinance. There was no discussion on whether one or two of the selected monuments might be more offensive than others.

Rather, it was determined to be necessary by leadership from the privilege of power.  This is not fair.

I also oppose this ordinance because it is a distraction from the real issues I hear about every day that need to be addressed:

Finally, I oppose this ordinance as it has been written and debated because it divides us into two groups: ‘for’ and ‘against.’  In my many years of working in the neighborhood, my leadership was always informed by a diverse public who provided insights on the way forward.    From this inclusive process, we succeeded in rebuilding a community that people had given up for lost.

As leaders, we need to move the New Orleans forward by addressing the needs of citizens and by building the trust and the determination of all of the people to work together so we can become a welcoming, inclusive, equitable, and tolerant city.