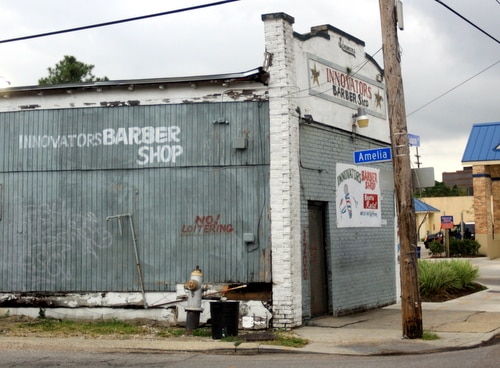 Two armed men were arrested Tuesday night in connection with the weekend’s armed robberies of the Jazz Daiquiri Lounge and Innovators Barber Shop, and one of the suspects was found with a gun taken from the lounge robbery, New Orleans police said.

Rodney James, 28, and Jacolby Jarvis, 21, were both arrested on Toledano Street just a few blocks from the scene of the robberies, and they are charged with armed robbery, possession of a concealed handgun, and possession of stolen property, police announced Wednesday. 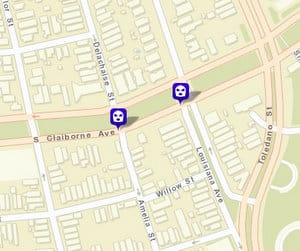 The first robbery was around 10:30 p.m. Saturday, Oct. 24, when two masked men entered the Innovators Barbershop at the corner of South Claiborne and Amelia streets, police said at the time. One of the intruders had a black handgun with a long magazine, and the other had a chrome revolver, and they robbed everyone inside of their cash, witnesses told police.

The following night, around 7:30 p.m. Sunday, two masked men — holding guns with the same description from the barber shop — went into the Jazz Daiquiri Lounge at the corner of South Claiborne and Louisiana, police said. They robbed everyone inside the story, taking cash, and additional handguns that belonged to the shop’s owner, the report states.

Tuesday night, the NOPD Violent Offenders Warrant Squad received a tip that the suspects in those cases were back in the area. They found James and Jarvis in the 3200 block of Toledano Street, near South Galvez.

“During an initial pat down, officers found both individuals were in possession of a concealed handgun,” according to the NOPD report. “After further investigation, police learned one of the weapons was reported stolen in the armed robbery reported at the Jazz Daquiri Lounge.”

Based on the circumstances, the duo were likely on their way to commit another armed robbery, said NOPD Second District Commander Paul Noel said at this week’s meeting of ranking officers.

“There’s no doubt they were going to do a stick up over there,” Noel said. “Not only did we catch these guys, we probably prevented another armed robbery.”

Investigators then obtained a search warrant at a house on South Galvez that led to another silver revolver and evidence related to the robbery of both businesses, Noel said.

“This swift arrest is a direct result of the aggressive police work of our officers and the strong partnership we have with our community,” said NOPD Superintendent Michael Harrison in a news release. “We’ve made a commitment to relentlessly pursue individuals who commit violent crime and we’re doing just that. We will not rest until every neighborhood in New Orleans is a safe neighborhood.”

The arrests bring the solve rate for armed robberies in the Second District to 51 percent for the year, nearly twice the national average for similar-sized cities, Noel said. The South Claiborne restaurant robberies are not believed to be related to the rash of robberies at Patois, Cafe Atchafalaya or Monkey Hill, but those cases remain under active investigation, Noel said.

Unlike the restaurant robberies — which provoked citywide outcry over their brazen, dangerous nature — a tense silence reigned over corners of South Claiborne early this week, even after the arrests. No news vehicles or mounted patrols were anywhere to be seen.

Employees at the barber shop had the front door locked, despite a customer in the chair, and declined to speak to a reporter. The bartender at Jazz Daiquiri said she wasn’t at work during the robbery, didn’t know what happened, and declined to offer the name of a manager who could speak about it.

One man in the block, who insisted upon not being identified in any way, said that no one wants to be seen talking about the robberies.

“It’s dangerous out here,” he said.