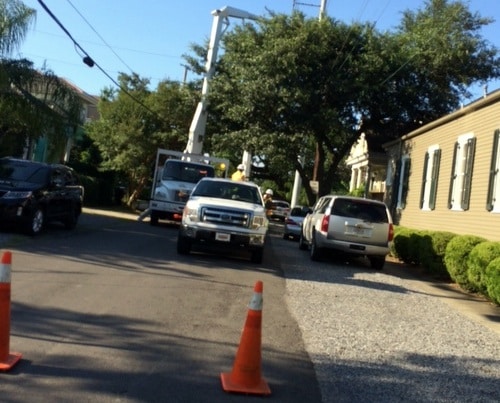 Entergy trucks blocking the street on June 2, aka, life in New Orleans. (photo by S.L. Alexander)

As we begin to age in place, we Baby Boomers are being bombarded with suggestions in support of our insistence that 60 will just be the new 40: structured exercise (walk 10,000 steps a day!), careful diet (eat a lot of blueberries!), and mental gymnastics (do crossword puzzles in ink, even the one in the Sunday New York Times!).

But those of us of any age who are lucky enough to live in New Orleans as the tenth anniversary of August 29, 2005 (which I call “the late unpleasantness”) slinks our way, don’t need to wear our Fitbits 24/7. Just dealing with the confluence of various deadlines for spending government money, an estimated 71 billion federal bucks to rebuild the most devastated city since Sodom and/or Gomorrah — which certain folk have compared us to, actually — has forced us to strengthen ourselves in at least 10 ways as we fight a uniquely local condition: New Orleans Infrastructure Fatigue.

Let us count together:

10. Although the Army Corps has spent a reported $14 billion on them, the newly repaired levees are already sinking, causing us all to remain on permanent mental alert, constantly revising our evacuation plans each time there is a wisp of wind off Africa from June 1-November 30 each year.

9. FEMA reportedly spent $24 billion for us to fix up our homes. Years of dealing with Road Home and suing contractors who either install killer Chinese drywall — or skip out with all of our money after only half the work — result in a much stiffer mental workout than any silly crossword puzzle.

8. Entergy, the electric company which you may recall makes even Cuba’s five-decades-old grid seem modern by comparison, wipes out swaths of power for days as it did last fall, the very day Daughter+1 were visiting, just because some drunk hit the pole at the end of my street.

7. Then I recently came home to six giant Entergy trucks blockading my street while men were working on a pole in front of my house: it’s the start of a year-long project replacing with “3M aluminum conductor composite reinforced high voltage wire” the 230-kilovolt transmission lines on certain streets starting with mine. Worrying about where we’ll park for the next year, since so few of us have off-street parking — and the effects of enhanced radiation — keeps us pacing around. That Fitbit? Forgeddaboudit! 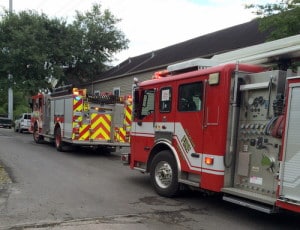 Sometimes fire trucks provide exercise for the resident seeking to get home. (photo by S.L. Alexander)

6. Similarly, last month my street was blocked off by four fire engines after workmen painting next door hit a wire that started smoking, then a couple of weeks later by six ATT trucks — after a construction company digging up my street accidentally hit the phone wires for 1200 phones, knocking out our phone lines, burglar alarms, and Wi-Fi/Internet—the very day before Daughter was finally chancing another visit, bringing me a shiny new Apple TV which of course couldn’t be set up since it works via Wi-Fi.

5. The daily deepening potholes, the often blinking traffic lights, the constantly changing barricaded lanes on many streets: these keep our minds sharp as we try to drive around town, especially at night, made even more exciting by…

4. the Army Corps’ SELA project, digging up all three cross-town avenues to install underground canals, the same roads just repaired by the DOT’s Submerged Roads program (as if there are any other type of roads around here). This is also causing…

2. climbing around those dusty pits formerly known as streets and sidewalks, causing all of us who were finally cured of our Katrina coughs to now develop what after years of tests the doctors shrug off as “cough-asthma.“

1. Finally, at a Green Army presentation by (now-retired) U.S. Army Lt. Gen. Russell Honore last week, listening to the hero of the post-Katrina federal flood describe the virtual cesspool of political corruption which is causing our entire state to turn into a literal cesspool, I was struck with the parallels to the nefarious machinations of fictional U.S. President Kevin Spacey in the Netflix series House of Cards which I’ve been binging on the past couple of weeks since ATT finally restored the Wi-Fi and I can use my new Apple TV. So I wouldn’t be surprised to find out certain public officials (not already imprisoned or at least under indictment) have similar plans to push whistleblowers such as Honore (since we don’t have subways around here like President Spacey in DC) under what’s left of the St. Charles Avenue streetcar.

Seriously, we’re grateful we can just laugh. Most the world’s people suffer much worse problems than Infrastructure Fatigue. I’m counting my blessings, hope you and yours may also in our land of rainbows (according to the left) despite Obamacare death panels (predicted by the right), since this past July 4 might be our last chance to fly any but the official stars and stripes, as we all pray for God to bless America.

S.L. Alexander joined the Loyola University Mass Communications faculty in 1991, and is author of Courtroom Carnival (about famous New Orleans trials), a co-author of The Times-Picayune in a Changing Media World (which documents the newspaper’s history in light of its recent layoffs and transition to a digital product), and is currently preparing a memoir, Seaboard Coast Line.