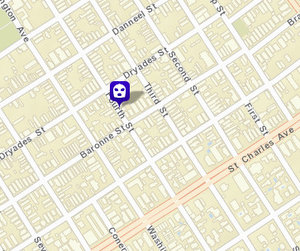 The victims, a man and a woman both in their 30s, were in the 1800 block of Fourth (between Baronne and Dryades) around 12:20 p.m. Thursday, Feb. 19, when a man with a gun approached and demanded their money, according to the initial NOPD report. The victims handed over what they had, and the gunman left, the report states.

One Response to “Two people robbed at gunpoint on Fourth Street, police say”