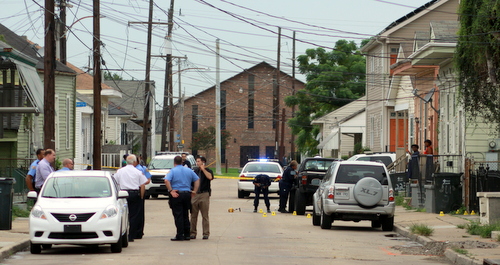 Crime-scene technicians photograph evidence marked by yellow cones in the road and on the sidewalk after a shooting Wednesday afternoon at the intersection of St. Andrews and South Liberty streets in Central City. (Robert Morris, UptownMessenger.com)

A man was left in critical condition Wednesday after being shot several times near a Central City intersection, New Orleans police said.

The victim — a man in his early 20s — was near St. Andrews and South Liberty streets around 4:20 p.m. when he was approached from behind by a man who started shooting at him, according to the initial NOPD report. He was hit several times and taken to the hospital in critical condition, the report states.

Further details about the shooting were not immediately available. Anyone with information is urged to call CrimeStoppers at 822-1111.