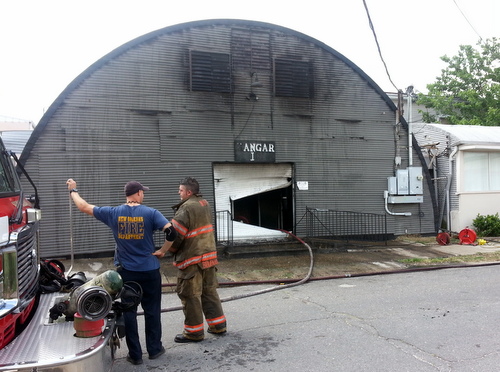 The Hangar 13 nightclub in Broadmoor was gutted by fire Monday afternoon, but the Rendon Inn lounge immediately next door emerged from the blaze without any damage, firefighters said.

Around 2 p.m., passers-by opened the front door of the Rendon Inn and said the metal building next door was on fire, said a Rendon Inn bartender who asked not to be identified by name. She got her customers out and called 911, she said.

“I could see black smoke from the top,” she said.

Firefighters were able to keep the blaze confined to Hangar 13, though the upper section of an apartment building to the right of it had some siding damage, said District Chief Victor Lacava of the New Orleans Fire Department. The damage inside the building was “pretty extensive,” he said, and while the metal building remained standing, it is unclear how much structural damage was caused by the heat of the flames.

“It’s all steel, so it kept most of the fire inside,” Lacava said.

Hangar 13 (in a building formerly known as The Hangar) had been closed for hours and empty when the fire started, Lacava said, and the owner was the last one to leave the night before. How the fire started remains under investigation, he said.

Meanwhile next door, Rendon Inn owner Suez Wilson said she is grateful for the work of the firefighters. The Rendon Inn can actually remain open Monday, she said — she found no damage at all to her building.

“You saved us, baby,” Wilson said as she brought bottled water to firefighters cooling down on her back porch, which is directly adjacent to The Hangar (though they are separate businesses). “They were wonderful. They were here in no time.” 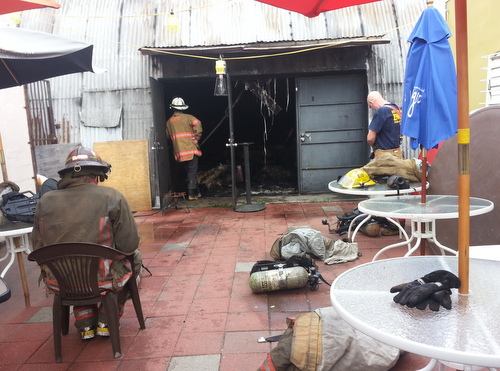 Firefighters cool down on the back patio of the Rendon Inn after extinguishing the blaze inside the Hangar next door. (Robert Morris, UptownMessenger.com)