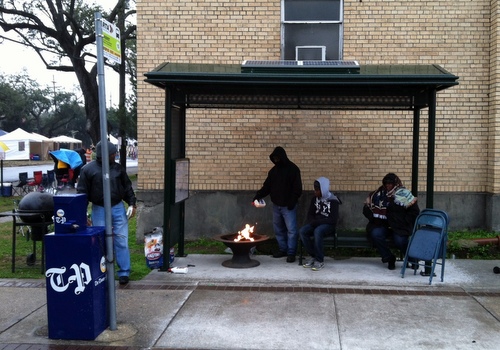 Revelers awaiting Rex on Mardi Gras Day underneath the bus stop at Freret and Napoleon fuel their fire in an effort to keep warm. (Photo by Jean-Paul Villere for UptownMessenger.com)

Ultimately, despite enjoying most of the holiday, this Carnival felt like two big layers of contradictions beginning with:

In some time and place far, far away from here surely there’s a logical progression to an annual festivities unfolding, where attendees acknowledge the practical and embrace the orderly.  But that will never be New Orleans.  A place where a broken tradition places king cake babies alongside the pastry for safety.  Meanwhile the limits of hypothermia get tested.  And maybe its that palpable incongruity that keeps us all coming back for more.  To be sure, the Mardi Gras experience anyone may wish for likely will never be the one hoped for, and if nothing else this Fat Tuesday exemplified this notion: you get what you get.

One Response to “Jean-Paul Villere: A tale of two Crescent Cities”