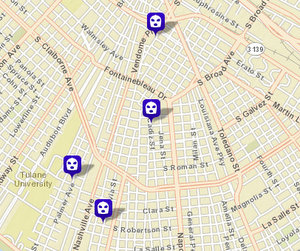 A rash of four armed robberies was reported in the Broadmoor and university areas Saturday evening, New Orleans police said.

The robberies were reported as follows:

In the Palmer case, the victims were two women sitting in a vehicle when they were approached by two black men, Tulane police said. The first suspect was described as “5’10”, medium build, clean shaven, wearing a black hoodie and blue jeans, armed with a silver handgun.” The second was described as “6’1”, thin build, wearing a multi-colored long sleeve shirt and dark jeans.”