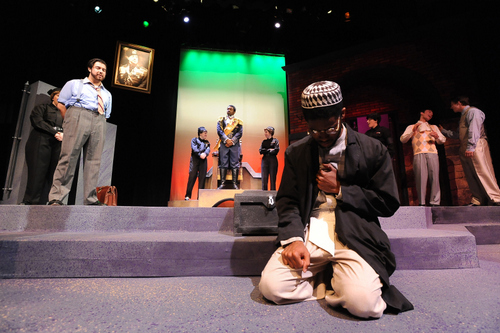 If you missed the premiere weekend of Loyola University’s production of Shakespeare’s “Merchant of Venice,” you have a few remaining chances to catch it through Saturday.

For details, see the news release below:

The world of William Shakespeare comes to life in November as the Department of Theatre Arts and Dance at Loyola University New Orleans presents the bard’s groundbreaking dramatic masterpiece, “The Merchant of Venice,” an unforgettable tale of mercy and justice, generosity and greed.

“The Merchant of Venice” mixes elements of comedy and tragedy to provide a complex exploration of religious and ethnic discrimination, hypocrisy and rampant materialism. In the midst of the play’s scrutiny of controversial issues, however, Shakespeare composed some of his most beautifully lyric language for the theatre.

Since its release, the play has enticed audiences and artists alike, inspiring fresh interpretations and works of art in other mediums, such as 20th century British composer Ralph Vaughn Williams’ choral music piece, “Serenade to Music,” which takes its lyrics from the love poetry found in “The Merchant of Venice.”

The power of Shakespeare’s poetry and prose, combined with his searing examination of the social issues still plaguing humanity centuries after the play’s debut, make this a not-to-be-missed theatrical event.

Tickets are $12 for general admission and $8 for Loyola faculty, staff, students and seniors. For tickets and information, visit montage.loyno.edu or call 504-865-2074. Free parking is available in the West Road Garage, accessible from St. Charles Avenue. 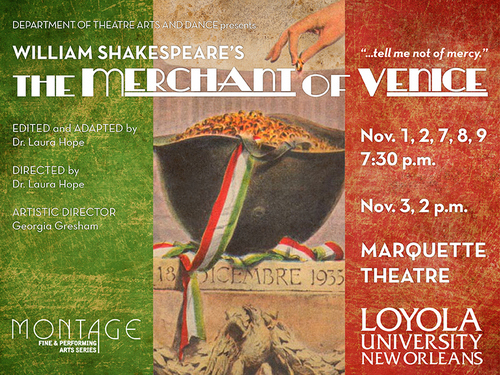