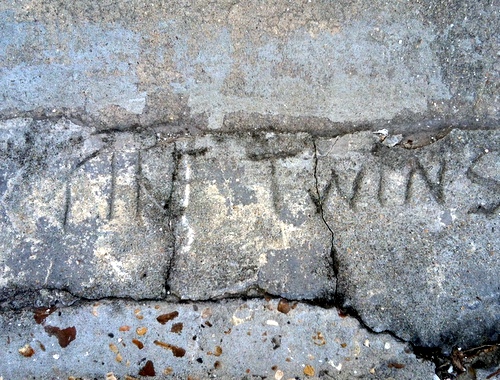 The 2000 block of Ursulines. (photo by Jean-Paul Villere for UptownMessenger.com)

I have always had a fascination with the written word in public places. Not street signs, business names or general advertising or billboards: you know, the traditional, formally executed kind via a municipality or organized venture, spreading whatever message usually of an identifying or sales nature.  I mean the taggers, whether via graffiti by marker on a bathroom wall or spraypaint under a bridge, or those working in fresh concrete getting the last laugh (no grey ghost will come around and buff out what’s set in mortar, at least not with any expediency).  What happened to Fred Ratke anyway?  I notice a lot of new work he’s leaving up longer than I’d expect.

Yesterday I found myself in Treme walking down Ursulines when inexplicably the word twins came into focus in the pavement.  Neatly scrawled, maybe a yin next to it.  Tough to say.  Was this a failed Yin Yang Twins send up?  Scoping out the rest of the block I noted some entrepreneurial young men plying their wares on a nearby street corner directly across from a blue and white sign post that read DRUG FREE ZONE. 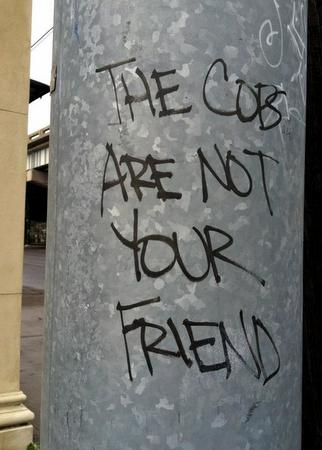 St. Ann near the Interstate 10 overpass. (photo by Jean-Paul Villere for UptownMessenger.com)

I flashbacked to when I was a kid in Southeast Texas to an electrical transformer casing near some railroad tracks on the east side of town with a tag that lacked a crucial ‘e’ to read Smoke Dop.  Yes, yes, the illiterate tagger remains a plight.  As I was a child before the age of smartphones, that image will have to go uncaptured and therefore unshared.  Maybe it’s still there?  I ain’t going back and checking, but if you find yourself in Beaumont and curiosity gets the better of you, let me know.

The soon-to-be frozen-in-time canvas of a freshly poured sidewalk may be the most tantalizing carrot for the delinquent or otherwise on the edge.  These days as I watch street corner after street corner along the Freret commercial corridor get redone and redone again and again, new concrete laid and busted up I see unrealized winter crops of yet composed thoughts whispering in their general direction.  Will the unwatched hand of neighborhood children wield a stick and apply their street name?  Perhaps a university attendee of the fraternal order and their jerseyed moniker may soon grace our streets?  Will Hack Dog, Tater, or Wizzy leave a pseudo eternal reminder that they were in fact here?  If they do, the more CCTV that posts around our fair city, they more likely somebody somewhere is watching. 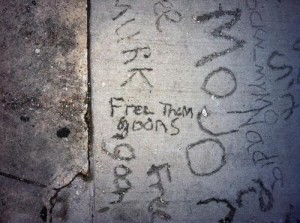 The 3200 block of General Taylor or so. (photo by Jean-Paul Villere for UptownMessenger.com)

Some scenarios are too tempting.  And as a society we educate our children to always sign one’s work, so go figure.  Then there’s the notion of converting a readership over to your way of thinking.  Do this, don’t do that, can’t you read the sign.  And so on.  Though when I stumbled across Free Them Goons recently I immedately felt the opposite.  A goon by any definition in my estimation should not be freed.  Why?  They’re goons!  In short, when tagging, choose your words carefully.  You likely have limited time to get your message across.  And spelling and neatness still count.  Creativity trumps all, but clearly not everyone can be bold like Rok Bom.  Man, I miss Rok Bom.  Have you seen the unimaginative drivel that replaced Rok Bom?  It’s no Miro.  Open your eyes my fellow New Orleanians to the hand altered landscape around you, and tell me, what do you see? 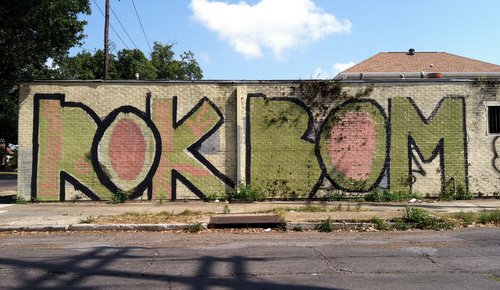