Sometimes so much can turn on so little.  It was June 26, 2013, around 2 a.m.  Marshall Coulter, a 14-year-old boy with a history of criminal behavior, jumped the locked driveway gate of a home in Mid-City.  It was the home of a family: Merritt Landry, his pregnant wife and his young child.

Within the home, a dog barked.  Landry was awakened and went to see if there was an intruder.  He took a pistol with him.  Once outside, he reported seeing Coulter and asking him to freeze.  Coulter turned around to face him and appeared to be reaching for something on his hip.  Landry fired once, hitting Coulter in the head.  Coulter survived, but remains in critical condition.

“Merrit told his family that he had said, ‘Freeze,’ and it looked like the guy turned at him — like he had his hand on his hip.  But who knows?” neighbor Charles Hazouri described to reporters shortly after the incident.

Landry was arrested and charged with attempted second-degree murder.  He remains out on bond.

Much of the ensuing legal debate over Landry’s actions seem to relate to whether Landry had cause to believe he was in “imminent danger.”  Certainly, if one takes Landry’s story at face value with no conflicting evidence, he has a good case for self-defense.   The idea that he found Coulter within a secured area immediately adjacent to his home, ordered him to freeze, and then Coulter turned around while appearing to reach for something on his person, would seem to exonerate Landry.

What has not been discussed, however, is how that the fact that Coulter survived – however narrowly – may make it difficult for Landry to claim self-defense.

Everyone has heard of the idea that the state bears the burden of proving a criminal defendant’s guilt “beyond a reasonable doubt.”  A defendant is innocent until proven guilty, and if there is any serious doubt as to the defendant’s guilt, he should go free.  The great British legal theorist, William Blackstone,   explained the reason for this when he famously argued that “[i]t is better that ten guilty persons escape than that one innocent suffer.”

However, how does this work when the accused claims self-defense, as Landry does?  In State v. Freeman, 427 So.2d 1161 (La. 1983), the Louisiana Supreme Court held that when self-defense is claimed, the burden of proof, as well as the quantum of proof, remains the same: the prosecution must disprove the accused’s claim of self-defense beyond a reasonable doubt.  However, it left the issue open for non-homicide cases.

In State v. Fluker, 618 So.2d 459 (La. App. 4 Cir. 1993), a panel of the Louisiana Fourth Circuit Court of Appeal, the circuit that includes Orleans and Plaquemines Parishes, held that the same rule would apply to non-homicide cases as homicide cases – proof by the state beyond a reasonable doubt.   However, in State v. Wischer, 2004-0325 (La. App. 4 Cir. 9/22/04), 885 So.2d 602, another panel of the Fourth Circuit found the opposite, holding that the burden of proof was on the defendant to prove self-defense by a preponderance of the evidence.

The Wischer standard means that any criminal defendant claiming self-defense is effectively guilty until proven innocent, and that the determining issue is decided according to the narrowest of standards – the jury can only feel that the defendant’s guilt has been proven to 51% certainty, and it is still supposed to render a guilty verdict.  That is literally the same as the flip of a coin; research has revealed that a very slight advantage, of about 1-2%, inheres to one side or the other depending on the manner in which the coin is flipped.  This is fine in civil trials where a person is damaged and somebody will ultimately bear the loss, but it has no place in criminal trials where society is imposing punishment.

Accordingly it should come as little surprise that virtually no other jurisdiction uses this standard.  Only one other state in the entire country places the burden of proof on the defendant claiming self-defense, and that state is Ohio.  Forty-eight states have decided that “guilty until proven innocent” for people claiming self-defense is ridiculous.

Here in the Fourth Circuit, however, we remain in limbo.  Because two different panels have ruled in the exact opposite manner, there is an unresolved split and neither standard wins.  Thus, judges have an incentive to simply tell juries nothing about the burden or quantum of proof to avoid being reversed.  On appeal, the Fourth Circuit can avoid the issue entirely by simply saying that the jury could have been correct using either standard, indulging the bizarre-but-legally-recognized fiction that having the correct standard from the get-go could not have possibly altered the jury’s decision.

There is opposition to the continued refusal of the Fourth Circuit to articulate a standard.  In State v. Black, 2009-1664 (La. App. 4 Cir. 06/17/10); 41 So. 3d 1243, Judge Terri F. Love endorsed the Fluker standard and argued that “this court should resolve the conflict en banc and articulate the burden of proof, which would provide clarity and direction.”  Sadly, the Fourth Circuit has failed to take her advice within the past three years.

What all this means for Merritt Landry is that the jury will probably not have the benefit of the proper standard for a criminal case involving self-defense, so they will be working from the seat of their pants.  Landry may well have been better off if Coulter had died at the scene, and there’s something rather sickening about that thought.

Regardless of how one feels about Landry’s decisions that night, every criminal defendant is entitled to the benefit of the presumption of innocence and the reasonable doubt standard.  Blackstone’s ratio still holds true; we have to accept that some people we consider to be “guilty” will go free if we provide sufficient protections for the truly innocent.  Sometimes this will be difficult to accept because nobody wants the guilty to go unpunished, but it’s a crucial component of a fair and balanced criminal justice system.

Of course, there’s an obvious solution for all of this.  Instead of debating more frivolous matters, legislators should pass an amendment to the Louisiana Civil Code that spells out the standard and quantum of proof along the lines of Fluker.  Until we do that, we’ll be an outlier state that convicts people of major felonies based on a mere flip of a coin. 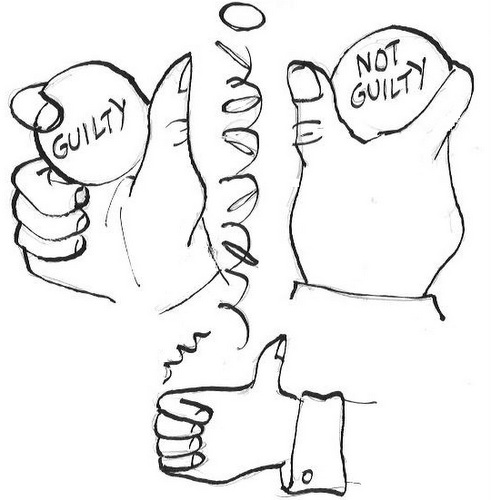 (cartoon by Owen Courreges for UptownMessenger.com)