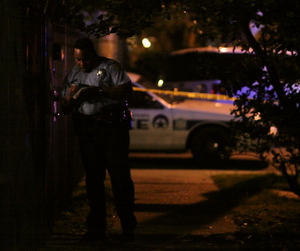 An officer investigates a shooting in the 800 block of Milan on March 4. (UptownMessenger.com file photo by Robert Morris)

Investigators are continuing to pursue new leads in a mysterious shooting earlier this month on Milan Street, but so far little new evidence has turned up to shed light on who might have done it or why, authorities said.

The victim in the March 4 shooting on Milan Street is continuing to recover from the gunshot wound to her neck, but told detectives she barely got a look at the man before he shot her, said Lt. Frank Young of the NOPD Sixth District investigative division. She was loading laundry she’d washed at a friend’s house into her car when he approached, and all she saw was the man’s hand emerge from a dark-colored hooded jacket, Young said.

The woman screamed and the gun fired, police and neighbors have said. No words were exchanged, but there is no reason to believe the gunman knew the woman, Young said.

“I don’t know if this was going to be a robbery that was thwarted by her screaming, or if it was a random act, or if there was a motive I don’t know about yet,” Young said.

Police have combed the neighborhood for witnesses who may have seen the man, who reportedly ran off toward the river, or cameras that may have captured footage of him before or after the shooting. Nothing concrete has turned up so far, but residents of the neighborhood have remained on high alert, Young said, and continue phoning in anything unusual they see to investigators.

“After something like this happens, people in the neighborhood start being hyper-observant, and they’re reporting a few things to us,” Young said.