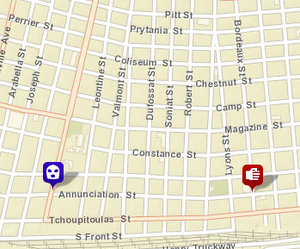 Locations of the New Year’s Eve robbery on Jefferson and New Year’s Day fight on Annunciation. (map via NOPD)

In a rash of New Year’s violence around Uptown New Orleans, a man was robbed at gunpoint on Jefferson Avenue, a Gert Town man was beaten in his home by men demanding money, another man was stabbed several times in a fight on Annunciation Street and a Milan resident was shot on his porch, according to initial police reports.

The robbery was reported just before noon on New Year’s Eve, when a man in the 600 block of Jefferson Avenue was getting some items from a shed in the rear of his house, the report states. He was approached by two strangers, one of whom had a gun, and they took his cell phone and wallet, the report states.

The home invasion was reported in the 8000 block of Olive Street about 12:30 p.m. on New Year’s Eve, when a resident went to answer a knock at the door, the report states. Two men pushed their way in, pulled guns from their waistbands and demanded money they said he owed them, according to the report. The victim gave them $30 from his pocket, and as the intruders left, “one threw a gun striking him in the head while the other struck victim with a 2×4,” the report states.

The stabbing on Annunciation Street took place around 5:40 a.m. on New Year’s Day, when two men were walking in the 4800 block and got into an altercation, the report states. One of the men, 27-year-old Christopher Hyer, “produced an unknown object and the victim sustained cuts to the leg and hip” that required treatment at the hospital, the report states.

Hyer was arrested on a charge of aggravated battery, which carries a possible sentence of up to 10 years in prison. His bond was set at $7,500 the same day, according to court records, and no booking photo is currently available from the Orleans Parish Jail.

Finally, the shooting took place at 9:30 p.m. Tuesday in the 2200 block of Foucher Street, where a man was sitting on his porch when a stranger came out of an alley and began shooting at him, the report states. The victim was hit once in his right calf, the report states.

No further details were immediately available on these cases. Anyone with information about them is urged to call CrimeStoppers at 822-1111.

5 Responses to “Man robbed at gunpoint on Jefferson Avenue; another man cut in fight on Annunciation”