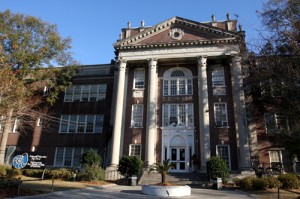 The long-simmering disagreement between Lusher and Audubon charter schools over which should be allowed to move into the Allen School building when Sci High moves out flared up Thursday afternoon, when a formal request by Lusher for a promise for the building reached the Orleans Parish School Board’s property committee.

The request filled the small committee room with supporters of both programs, but the 45-minute conversation was dominated by Audubon supporters’ arguments that their need for the school is greater — technically, both of Audubon’s campuses are currently in “temporary” facilities. The OPSB committee members, however, had little interest in wading into the fight, saying any move by Sci High is so far in the future that it makes little sense to argue about it now.

The written request made by Lusher largely lays out the school’s case: Its scores are high, its waiting lists are hundreds of students long, and an expansion it began two years ago at the Jewish Community Center has stalled, because all four classrooms there are full and no more are available. Further, former RSD superintendent Paul Vallas met with Lusher in 2009 and “stated RSD’s intention to lease the Allen Building to Lusher when the building became available,” the request says.

Audubon supporters, however, said they had been requesting the building for much longer. Audubon’s founding board chair, Carlos Zervigon, said that when Audubon first found out that the old Carrollton courthouse currently housing its middle school was slated for decommissioning as a school, its leaders began requesting the Allen building in the fall of 2008. The Carrollton building has serious structural problems that Hurricane Isaac made worse and is largely unfit for students, agreed most of the 12 speakers on behalf of Audubon.

“To think that Lusher would be granted an opportunity for a third building before Audubon has two seems terribly unfair,” said Audubon board member and parent Jolynn King.

“We’re not seeking to expand,” concurred Audubon principal Janice Dupuy. “We’re seeking to have a place that is warm, safe and dry for our existing students.”

The three OPSB members who were present for the committee — Ira Thomas, Thomas Robichaux and Lourdes Moran — were not inclined to take up the issue Thursday. The building is still controlled by the Recovery School District, and there is no home for Sci High to move into any time soon, so any movement on the Allen building is years down the road, they said.

“The last thing we need to do is be getting into a fight over something we have no control over,” Moran said.

The committee voted to defer the issue, which drew praise from SciHigh board chair Mary Zervigon, who said she didn’t want any decision made that could put Sci High out of the building without one to move into.

Lusher CEO Kathy Riedlinger also said she supported a deferral, and that she welcomes a more lengthy, transparent deliberation over the decision. She noted that quite a few Lusher supporters were in the audience — at least a dozen raised their hands — but hadn’t signed up to speak.