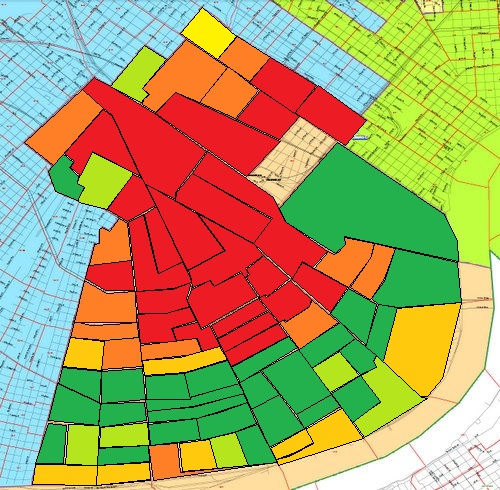 In her runoff victory Saturday night, LaToya Cantrell not only won more precincts than Dana Kaplan, Cantrell also won her best precincts by far wider margins than Kaplan did, an analysis of the results shows.

Cantrell won 45 precincts outright, compared to Kaplan’s 33 (they tied exactly in one precinct, Ward 4 Precinct 6 in Mid-City, with 12 votes apiece there). Out of those, however, Cantrell won 24 precincts by 80 percent of the vote or more, while Kaplan did not win any by that margin — her best precinct, Ward 3 Precinct 1 in the Central Business District, gave her 79 percent of the vote.

Cantrell’s campaign was based on her record of leadership in Broadmoor and the Broad Street corridor, and those neighborhoods formed the core of her high-margin precincts. Her support was similarly strong in the parts of Milan and Central City closest to South Claiborne Avenue, and the Gert Town and Treme precincts closest to Broad Street.

Those wide margins overwhelmed other factors that might have played a determining role, such as turnout or geography.

Geography | In the Nov. 6 election, St. Charles Avenue served as a boundary line of sorts — Cantrell won almost all the precincts on the lakeside of St. Charles; Eric Strachan won most of those along St. Charles itself; Kaplan was strongest along the Magazine Street corridor; and those closest to the river were generally split.

Bellwethers | The precinct that had the closest results to District B as a whole was Ward 13 Precinct 12, a residential section adjacent to the Freret corridor bounded by Jefferson, Upperline, Danneel and LaSalle. That precinct’s results were 53.68 percent for Cantrell, almost exactly the same as her 53.71 percent margin across District B.

Also very close the district-wide result were a series of precincts along the river — Ward 13 Precinct 1, Ward 12 Precinct 3 and Ward 11 Precinct 2 — which all gave Cantrell 53 percent of the vote as well.