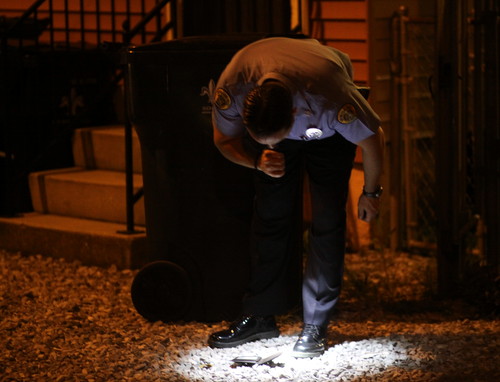 A New Orleans police detective examines a wallet taken in a home invasion on Pitt Street and apparently discarded by the fleeing suspects on Aug. 27. (UptownMessenger.com file photo by Robert Morris)

Fingerprints from a suspect in a New Orleans East murder were found inside a car taken during a home-invasion robbery on Pitt Street in late August as Hurricane Isaac came ashore, police said Wednesday.

On the night of Aug. 27, as Hurricane Isaac approached the Louisiana coastline, two brothers in their 20s were inside a home in the 7400 block of Pitt around 9 p.m., when two masked men burst in with guns, tied the victims up with extension cords, and ransacked the house for valuables before fleeing in one victim’s 2008 Mazda 3.

On Aug. 31, the a man was seen with the car behind a building in the 8400 block of Aberdeen Street in New Orleans East, and police arrived to find 20-year-old Travis Gregoire with it, arresting him on a charge of possession of stolen property, said Sgt. Warren Keller of the NOPD Second District property crimes division.

Later, however, fingerprints in the car came back to match 16-year-old Charles Carter, Keller said. The victims could not identify Carter because of the mask, however, so detectives cannot charge him with the home-invasion, Keller said. He was also a suspect in an armed robbery from the neighboring Sixth District, Keller noted.

Carter is currently being held on a second-degree murder charge as an adult, according to jail records. Carter is a member of a group of New Orleans East teens known as the “Marley Gang,” according to a report by Naomi Martin of The Times-Picayune, and that charges stems from the slaying of a UNO student last month.