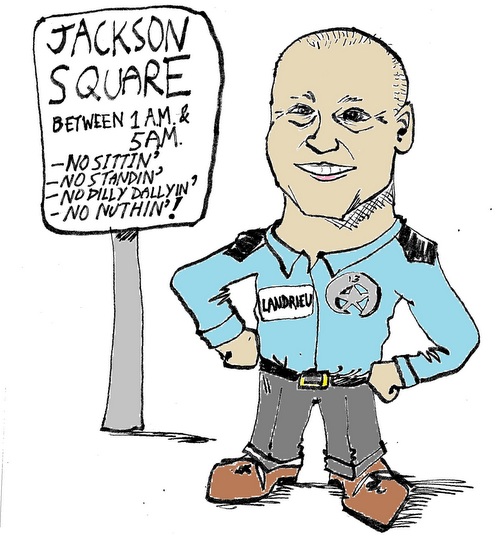 Last week, another salvo in the seemingly never-ending battle between New Orleans and the U.S. Constitution was lobbed by Mayor Landrieu.  This time Landrieu has proposed an ordinance with its sights on Jackson Square, the iconic public space at the heart of the city.

Now technically the target isn’t actually the square, but the surrounding streets and sidewalks (i.e., public rights of way) that the city has come to dub the “Jackson Square Pedestrian Mall.”  Through Councilwoman Palmer, whose district includes the French Quarter, Landrieu has proposed an ordinance for the mall that would:  1) mandate “clear lanes;” and, 2) provide “closing times” between  1 a.m. and 5 a.m. to persons “stopping, standing, or loitering.”

Both parts of the proposed ordinance are problematic, but the latter is blatantly unconstitutional.

To hear Landrieu spokesman Ryan Berni speak, though, the so-called “closure” law is nothing new: “We’re trying to create some laws that give a little bit of order and establish some common sense closing times of the pedestrian mall,” he told the Times-Picayune.  “Most public spaces have hours of operation. There are hours of operation at Duncan Plaza and the Public Gardens in Boston.”

Berni’s sleight-of-hand is about as adept as your average sixth round of beer pong.  Landrieu wants us to believe that this is nothing more than a park closure law, which are commonplace and have been upheld countless times against constitutional challenges in courts across the country.   But that’s not what’s at issue here.  Here, the rights-of-way surrounding Jackson Square are not parks, they’re roads and sidewalks.

More importantly, though, is the fact that this law doesn’t actually “close” the rights-of-way on Jackson Square.  Rather, it provides that people may enter them but only “for the purpose of traversing the area without stopping, standing, or loitering.”

You see the trick?  This law doesn’t even need to use the phrase “closing times.”  It would say the exact same thing if it simply read: “Stopping, standing and loitering is prohibited in the Jackson Square Pedestrian Mall between the hours of 1 a.m. and 5 a.m.”  Landrieu threw in this drivel about closing times to make it seem like a park closure ordinance, when it reality, it’s an anti-loitering law.

This is a key distinction, because while park closure laws have generally been upheld against constitutional challenges, anti-loitering laws have, like anti-vagrancy laws, generally been thrown out as brazen attempts by public officials to give virtually unfettered authority to the police to harass and arrest citizens, or rather “undesirables” innocent of any criminal conduct. This is why, in its 1982 decision in State v. Stilley, 416 So.2d 928, 929 (La. 1982), the Louisiana Supreme Court struck down a law against loitering within 600 feet of a polling station or absentee voting site during an election.

“[L]oiter does not have a precise meaning,” the Court noted.  “One can loiter by standing or walking.  Almost any citizen within a six hundred foot radius of a polling place or absentee voting site could be charged with loitering.  One walking to the polling place to vote could be accused of sauntering. “

Therefore, the Court concluded, “[t]here are too many versions of the word loitering for the term to define criminal conduct.”  The statute could be “enforced against almost anyone or no one” and was thus overbroad.

Now, Landireu’s ordinance contains one crucial wrinkle.  It provides that a person can only be cited or arrested for “stopping, standing, or loitering” in the public rights-of-way alongside Jackson Square between 1 a.m. and 5 a.m. only if they first disobey an order by a police officer “to immediately vacate the area.”  However, this doesn’t save the statute.

After the Stilley decision, the state actually amended the anti-loitering statute for polling places to attempt to cure the constitutional defects, including a requirement that written notice be given to vacate before a citizen could be changed.   However, the law still used the word “loitering.”  Thus, the Louisiana Supreme Court once again held the law unconstitutional, noting that a criminal statute may not “entirely depend on whether or not a policeman is annoyed.”   State v. Schirmer, 646 So.2d 890, 902-03 (La. 1994).

Councilwoman Palmer has argued that the aim of the “closing hours” is to provide time to clean up the streets and sidewalks, but this doesn’t hold water.  Traditionally, these streets and sidewalks have been cleaned near dawn, just after 5 a.m., and it doesn’t take anywhere in the neighborhood of four hours to accomplish this task.

This law is a pretext for violating the state and federal constitutions, which Palmer is no stranger to doing.  The city is already staring down damages from Palmer’s ridiculous ordinance targeting certain speech with “social, religious or political” content on Bourbon Street (an ordinance that Mayor Landrieu failed to veto).  If this passes, we can look forward to more damage awards in federal court that the city is incapable of paying.

The entire ordinance, however, is full of pretexts.  The Administration has argued that the aforementioned “clear lanes” law is merely a restatement of existing law requiring clear fire lanes, but if that’s the case, then why is Landrieu proposing a new law?  Landrieu doesn’t seem to realize that characterizing a proposed law as redundant is not an argument in its favor.

So why is Landrieu doing this?  The conventional wisdom is that he wants to “clean up” Jackson Square in advance of the Superbowl, and thus the primary goal here is to keep the homeless out, or rather the bums and the gutter-punks.  Some people earnestly believe that this is a noble goal.  However, this ordinance will not just impact those groups.  It will also impinge on the tarot card readers, the street performers and the artists.  Street performers will have little to no room to perform under the “clear lanes” rule, and the artists and tarot readers who often set up early or run late will risk being hassled.  The ordinance is a shotgun blast masquerading as a scalpel.  It’s only a matter of time before the innocent get nicked.

Mayor Landrieu was not elected to attack the city’s culture and its own citizens for the purpose of creating some fake, idealized caricature.  I don’t want the French Quarter to be sanitized and prepackaged for tourists.  I don’t want Jackson Square to be nothing more than flagstones and AstroTurf.  And most importantly, I don’t want to think of the Quarter as a veritable prison where our basic freedoms don’t apply.

15 Responses to “Owen Courreges: “Cleaning up” your Constitutional rights in Jackson Square”