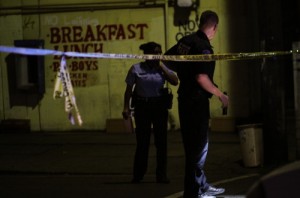 NOPD officers look for evidence at the scene of a shooting Monday night at the corner of Annunciation and Washington, where about a dozen shell casings were marked on the ground. (UptownMessenger.com file photo by Robert Morris)

Police made a series of drug arrests near an Irish Channel corner store this week as they continue investigating the shooting of two men outside of it Monday evening, they said.

Two men were shot near the corner of Washington and Annunciation, a 21-year-old hit in the face and a 31-year-old hit in the leg, police said at the time. The 21-year-old’s wounds were to the side of his face, so he is expected to recover, Sgt. Sabrina Richardson of the Sixth District persons-crimes unit reported at the district’s weekly meeting of ranking officers.

Both of the victims were known to police — one was previously a suspect in the shooting of a school bus in the Irish Channel, and the other was suspected in a rash of Irish Channel robberies, though there wasn’t enough evidence to charge either in those cases — and both were known to hang out around the corner store, said Sixth District Lt. Frank Young.

Though residents of the area said a large crowd was outside the corner store when the shooting took place, witnesses were initially reluctant to come forward, hampering the investigation, Richardson said. By late Wednesday, however, investigators had begun receiving information that could help with the case.

Meanwhile, task force officers from the Sixth District began focusing on the area, arresting three men Wednesday on drug charges and three others on outstanding warrants.

“We’re just concentrating our efforts patrolling the area and developing suspects,” said task force Sgt. Eric Gilliard during the comstat meeting. “Hopefully one of these guys, when they get in jail, they’ll decide they want to talk.”