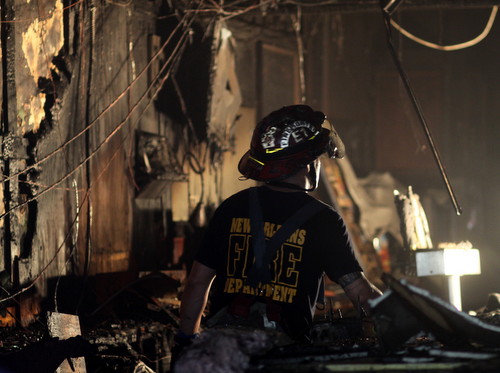 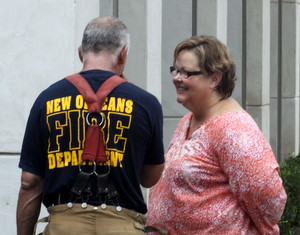 Debbie Huling, owner of Fat Harry’s, smiles despite the damage to her business as she talks to a New Orleans firefighter. (Robert Morris, UptownMessenger.com)

A Sunday morning fire gutted the bar area of Fat Harry’s, but the owner of the beloved gathering spot on St. Charles Avenue was already promising to rebuild before firefighters had even left the scene.

Firefighters were called to the bar at the corner of Napoleon some time before 8 a.m., and arrived to find smoke coming out of all sides of the building, said NOFD District Chief John LeBlanc. Once they got inside, they found the fire coming from the bar area, LeBlanc said.

Investigators were still trying to determine the cause. The building was saved, but much of the inside will need to be gutted, LeBlanc said.

“The main structure of the building is sound,” LeBlanc said. “It’s just internal.”

Next door, Superior Seafood did not seem to receive any damage, said manager Andrew Lugo.

Fat Harry’s owner Debbie Huling, standing on the sidewalk surrounded by supporters, said she did not yet know what caused the blaze, but was already focused on moving forward.

“We’re going to do our repair work and get back open,” Huling said. “All we ask is that people keep us in your thoughts and prayers, and come support us when we reopen.”

After Hurricane Isaac passed, Fat Harry’s was one of the first Uptown businesses to reopen, using a generator to begin serving customers Thursday morning. News of the fire spread quickly Sunday morning, and longtime customer Dexter Stephens rushed over to see what happened, with a Fat Harry’s hat perched on his head.

His first time to step in the bar was 38 years ago, he said.

“This is a family,” Stephens said. “It’s been like a family to me since I’ve known them.” 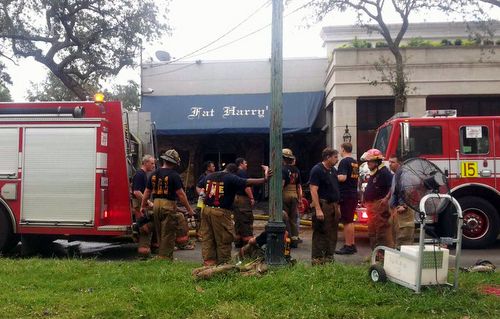 Firefighters cool off after extinguishing a fire at Fat Harry’s bar on St. Charles Avenue near Napoleon. (Robert Morris, UptownMessenger.com)