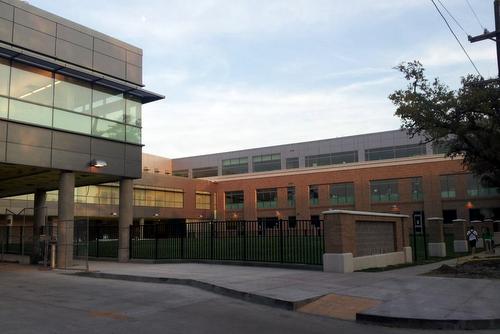 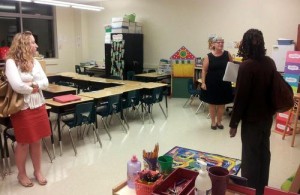 After a long-running search for a building followed by a temporary stint at the Touro Synagogue that was prolonged by a hurricane, ENCORE Academy has finally made it to the new Crocker school building that will serve as the new charter school’s home for its first school year.

Construction still continues around much of the Crocker campus; large pallets are stacked on the unfinished floor of the massive gym, and contractors continue their work long after the school day is over. But those who see the building’s spacious classrooms, wide hallways and cutting-edge technology for the first time, said School Leader Terri L. Smith, all share her own amazement.

“Parents come in, and they just say, ‘Wow,'” Smith said Tuesday evening as she gave a brief tour of the building to members of the ENCORE school board and other visitors.

After receiving its charter from the Orleans Parish School Board in January, ENCORE leaders originally thought they might renovate a Broadmoor-area warehouse into a new school building. In May, however, ENCORE officials announced that they had sealed an agreement with Crocker Arts and Technology School to co-locate in the new Crocker campus under construction on Marengo Street in the Milan neighborhood.

Construction delays meant the Crocker campus was not ready for the charter’s Aug. 20 start date, however, so the school found a temporary home at Touro Synagogue’s school building. Originally meant to last only two weeks, Hurricane Isaac delayed the move to Crocker yet again, and it wasn’t until last Monday that the school was finally able to move in.

After a whirlwind first week at the new campus, the ENCORE board held a brief meeting Tuesday night highlighted by a tour of the new facility. Board members saw the Promethean interactive board systems in each classroom, the music room with its row of Fender guitars and floor markings for Suzuki violin learners, and the library, gym and black box theatre that all remain under construction.

The board meeting also included updates on two other pressing issues as the school grows, enrollment and admissions.

The school has now enrolled about 190 students, about 15 short of their hopes for the first school year. Openings remain in first and fifth grades, as well as third grade — a level the school did not include in its original marketing, but added afterward based on parent demand.

Now, the school is under pressure to join the OneApp process created by the Recovery School District and adopted by the Orleans Parish School board for its direct-run schools, Smith said. Joining would likely guarantee a full cohort of students next year, she said, but Encore would essentially give up control of its admissions process. The board agreed to consider the idea as more details of the new joint RSD-OPSB effort become clear.

“I will be honest, there’s been a lot of dialogue about Encore being a part of the process,” Smith said. “People have been calling me.”

To read our live coverage of Tuesday’s meeting — including more photos from the school tour — see the box below.