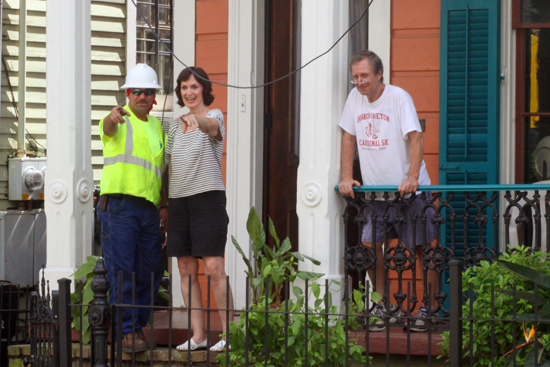 Residents of St. Mary Street near Prytania in the Lower Garden District smile and celebrate with an Entergy worker after power is restored Monday around a major tree that fell. (Robert Morris, UptownMessenger.com)

After restoring electricity to the last large neighborhood tracts Sunday evening, Entergy workers spent Monday focusing on individual, block- or address-level outages, and reported more than 94 percent of customers in the city had been restored by Monday evening.

Problems still remained: transformers were blowing in the Lower Garden District on Monday morning, and a swath of Uptown around Magazine Street and Audubon Park lost power again Tuesday morning. But most Uptown neighborhoods had more than 95 percent of power restored by Monday evening, according to figures released at 9 p.m. Monday: