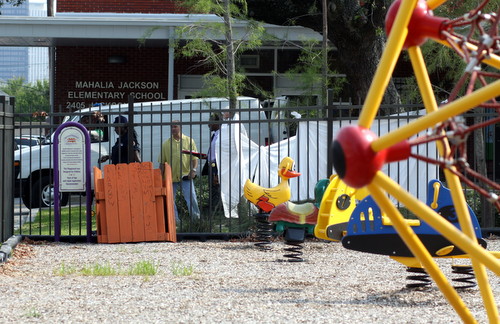 Investigators examine the body of 18-year-old Jamal Christian where it was found Tuesday morning on the grounds of Mahalia Jackson Elementary on Jackson Avenue. (Robert Morris, UptownMessenger.com)

On Tuesday morning, the third day of searching, the family of Jamal Christian passed through the abandoned 160-year-old United Methodist church on Jackson Avenue, into a vacant lot and across South Robertson Street into the yard of Mahalia Jackson Elementary School. When Christian’s father spotted his 18-year-old son’s body lying underneath the bushes, he threw his cell phone to the ground in despair and groaned, “Oh, Jamal.”

Police and witnesses believe Christian was shot Sunday afternoon around South Robertson and St. Andrew in a shootout that also struck another man in the foot, and that he was in the neighborhood to attend the Young Men Olympians second line that had started a few blocks away. Harold Augustine, parishioner of a nearby church, said he heard gunfire break out near Jackson and South Robertson around 1 p.m. Sunday.

“It was like the Fourth of July,” Augustine said of the gunfire.

Christian’s uncle, who asked that his name not be published, said he had seen his nephew before the second line. “He was in tip-top shape,” the uncle recalled. The boy asked to borrow $10 and went out, but expected to be back shortly to go to work with his grandmother’s janitorial service.

When he didn’t return, the family knew something was wrong and began looking for him that night. They came back to search again Monday, and again on Tuesday morning, his uncle said. By that time, they had little hope of finding him alive.

“We knew,” the uncle said. “Jamal was the kind of guy that, no matter what he was doing, if we would text him, he would call back. He was going to come home no matter what.”

The motive for the shooting remains under investigation, but Christian’s uncle said he doesn’t believe the gunmen were aiming at his nephew.

NOPD Officer Frank Robertson, a department spokesman, said police found evidence of the initial shooting when they responded Sunday afternoon but did not see the body. According to a preliminary investigation, Christian appears to have been shot once in the back.

“The area in which his body was positioned, his body could have been missed by anyone,” Robertson said.

Speculation among neighbors as to how the body wound up under the bushes and how long it had been there careened between possibilities Tuesday morning. Was he shot and tried to hide under the bushes, or was his body placed there afterward? How could it have remained on the school grounds for for a full day without the curious school children discovering it?

Investigators believe it seems most likely that Christian was fleeing from the shooting scene when he fell into the bushes, Robertson said, but all the other scenarios remain under investigation.

“If we wouldn’t have found his body it would have went to stinking and the school would have found it,” the uncle said. “It’s a shame we have to go out like this when our loved ones go missing.”

As police investigated, Augustine discussed with neighbors the need for a community meeting at the school to address crime on the streets, while Christian’s family members talked to investigators and fielded calls from loved ones asking about the search.

“Yeah, yeah we found him,” his uncle said into a cell phone, then paused. “No, we found him dead.” 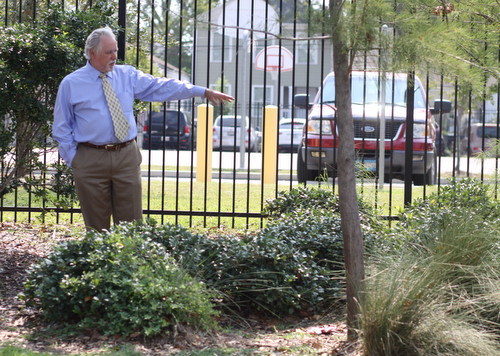 Orleans Parish School Board interim superintendent Stan Smith points toward the bushes where the body of an 18-year-old man was found Tuesday morning. (Robert Morris, UptownMessenger.com)

One Response to “Body found on grounds of Mahalia Jackson school, likely two days after shooting”