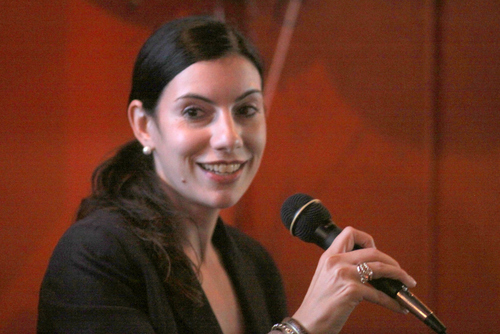 On the day before filing officially opens for the District B City Council seat — having just turned in what they believe is enough signatures to get candidate Dana Kaplan on the ballot — her supporters were ready to party.

And to get to work.

“This is really real. This is it,” said Norris Henderson of Voice Of The Ex-Offender at Kaplan’s campaign launch party on Tuesday night. “But that was the easy part.”

The signatures of 1,000 registered District B voters are required to get a candidate on the ballot, but Kaplan campaign manager Lelia Gowland said the campaign believes they gathered closer to 2,000, to stave off any inconsistencies with people signing under nicknames or new addresses, for example. Those will now be cross-referenced by name and address with the voter rolls by election officials, but the campaign won’t be told how many are considered “official” — once a 15-percent cushion beyond the 1,000-signature threshold is reached, officials are required to stop counting, Gowland said.

In brief remarks at the small, crowded Victory bar on Baronne Street downtown, Kaplan laid out a platform that centered on stopping violent crime, creating more opportunities for children and increasing trust in city government. As a co-founder of Safe Streets/Strong Communities and executive director of the Juvenile Justice Project of Louisiana, Kaplan said that if elected, she will use her experience to work for continued reform and improvement across the city’s criminal justice system.

“Continuing to strive for a high-performing criminal-justice system is a way to see real reductions in crime,” Kaplan said. “But it needs to be combined with more opportunities for our youth.”

After Kaplan turned in her petition on Tuesday, her two announced opponents were right on her heels Wednesday morning. Broadmoor Improvement Association president LaToya Cantrell and former Stacy Head chief of staff Eric Strachan both filed to run for the District B seat immediately after filing opened Wednesday morning, state election records show.

Cantrell, Kaplan and Strachan are the only three candidates who have publicly announced bids to be the next elected representative of District B on the City Council. Filing for the seat runs through Friday.