A still image from the robbery of Nemo's Carwash on South Claiborne Avenue. (via NOPD)

Video of the brazen robbery of a South Claiborne carwash that ultimately led to an officer shooting one suspect Saturday night has been released by police in hopes of identifying two robbers still at large.

The video shows three men in ski masks ambush the carwash employees with guns drawn, then force them into the building. A few minutes later, the robbers come back out of the building, and two leave in one victim’s black convertible 2005 Chrysler 300 (with Louisiana license plate VJG 696), and the third — later identified as 23-year-old Brandon Collins — leaves in a Nissan Altima. 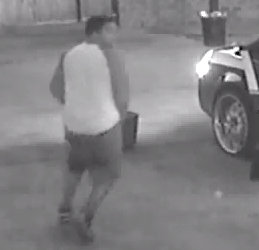 One of the suspects after apparently removing his mask. (video via NOPD)

The business owner was watching the video remotely and reported the robbery to police, and an officer arrived in time to see and pursue the Altima, according to a statement released with the video. When the car crashed on South Rendon Street and Collins attempted to flee on foot, the officer “gave chase and encountered the suspect between two houses in the block, where Collins was ultimately shot one time in the pelvis,” the release states.

The full text of the news release and the video are below.

On Saturday, June 2, 2012, Brandon Collins 23, was arrested for his involvement in the armed robbery of Nemo’s Car Wash, located at 2509 South Claiborne Avenue. Three suspects ran up to employees of the car wash with semi-automatic weapons with extended magazines visible in their hands, with ski masks on their faces and wearing latex gloves. After approaching and robbing the victims, the suspects forced the victims into a room where their hands were restrained. The suspects then emerge from the building and fled the scene. Two of the suspects enter the victim’s black 2005 Chrysler 300, with a convertible top, Louisiana license plate VJG696. Collins ran out of the view of the surveillance camera and flees in another victim’s Nissan Altima.

The incident was caught on surveillance by the owner of the business, who was watching from a remote location as the robbery unfolded. Collins is seen in surveillance footage wearing camouflage pants, a brown long sleeve shirt, a brown ski mask, and latex gloves, in possession of a semi-automatic firearm with an extended magazine. The business owner phoned the police, who dispatched units to the location. A New Orleans Police Officer near the area arrived on the scene in time to see the suspect vehicles fleeing the location. The Officer pursued the Nissan driven by Collins to the 1600 block of South Rendon Street, where Collins lost control of the vehicle, struck a parked vehicle and fled on foot. The Officer gave chase and encountered the suspect between two houses in the block, where Collins was ultimately shot one time in the pelvis.

Collins’s camouflage pants, ski mask, and latex gloves were confiscated from the scene, as well as property belonging to the victims. Collins was booked with five counts of armed robbery, theft of an automobile, possession of stolen property, and resisting arrest.

Collins was previously arrested in Jefferson Parish in August of 2011 for Assault by Drive-By Shooting, Resisting an Officer, Felony Criminal Damage to Property and Illegal Use of a Weapon.

The New Orleans Police Department is seeking assistance in locating the two suspects still at large and the stolen Chrysler. The suspects should be considered armed and dangerous.

Sergeant Nicole Barbe of the Public Integrity Bureau Force Investigation Team is handling the on-going investigation and can be reached at 658-6800.

The gunmen first appear at about the 2:45 mark in the video, then move out of the frame after about a minute and a half. They reappear in the frame at about the 7-minute mark to make their getaway.