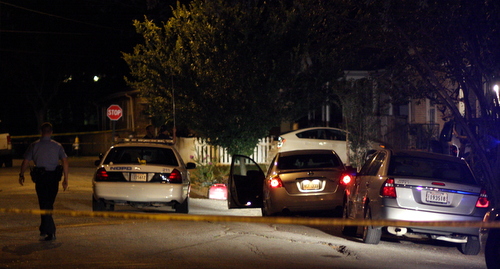 A car stolen in a robbery on South Claiborne Avenue sits with its door open in the 1600 block of South Rendon Street, where the suspect abandoned it to flee from police. (Robert Morris, UptownMessenger.com)

A suspect in an armed robbery was shot by a police officer as he attempted to flee on foot following a chase Saturday evening through Uptown New Orleans, authorities said.

Shortly after 8 p.m. Saturday, two people were closing a car wash in the 2500 block of South Claiborne Avenue when they were approached by two men, one of whom was carrying a gun, said Sgt. Sabrina Richardson of the NOPD Sixth District persons-crimes unit. They forced the victims back inside the business and ordered them onto the ground while they robbed the place of its cash, then locked the victims in a storage room, Richardson said. The two perpetrators then got into the victims’ vehicles to leave, Richardson said.

As they were leaving, an officer saw them and a chase ensued, leading to the 1600 block of South Rendon, where the suspect got out of the damaged vehicle he had been driving, said Officer Garry Flot, an NOPD spokesman. The officer fired a single shot that hit the suspect in the buttocks, Flot said, and the suspect was then taken to the hospital for treatment.

The officer was also hospitalized for an as-yet-unspecified injury, Flot said.

Investigators were able to confirm via security camera images that the suspect was in fact the gunman in the robbery, Richardson said. Flot said he did not know whether the suspect still had the gun at the time of his arrest.

Deputy Independent Police Monitor Simone Levine arrived at the scene on South Rendon soon after the shooting, and after several hours of investigation said it was still unclear what caused the officer to fire, or how he was injured.

One nearby resident said that he was out watering his lawn when he heard the sounds of a car chase, then a single shot being fired. Upon hearing that the chase may have been prompted by an armed robbery, he said he was worried that the gunshot wound would barely slow the suspect down.

“It’s getting scary,” he said. “It’s a shame. The city’s trying to come back, and you’ve got these thugs trying to take over.” 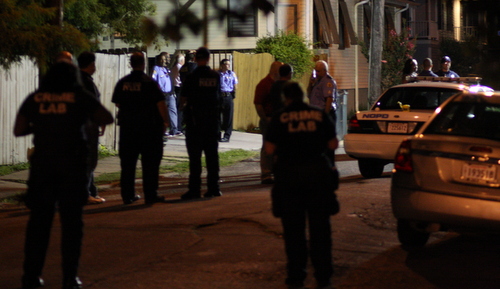 7 Responses to “Robbery suspect shot by police officer after chase”