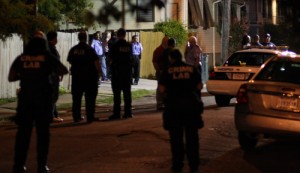 The robbery suspect shot by a police officer Saturday night has been identified, and NOPD authorities say he “turned towards the officer in a suspicious manner” in a dark alley prior to the shot being fired.

Prior to leading the officer on a chase from the robbery scene, 23-year-old Brandon Collins and at least one accomplice tied his victims up, police also said Sunday afternoon.

The full text of the official NOPD news release follows:

Brandon Collins, a 23-year-old local man, was arrested after robbing a business owner and customers at gunpoint, stealing a car and then leading police on a chase.

The incident started at about 8:20pm last night in the 2500 block of South Claiborne Avenue.

Officers responded to an “armed robbery” in progress and observed a silver Nissan Altima occupied by Collins fleeing the scene. The officers activated their lights and siren and attempted to stop the vehicle, but Collins refused to stop and fled. After an authorized vehicle pursuit, the suspect’s vehicle struck a parked vehicle in the 1600 block of South Rendon Street and became disabled. Collins fled on foot into a dark alley and was ordered to stop by an officer. Collins turned towards the officer in a suspicious manner, and was shot one time in the pelvis by the officer.

The officer suffered an abrasion to the head during the incident, was treated at a nearby hospital and was released.. The suspect’s injury is not considered life-threatening. He is being treated for his wound.

Collins will be booked appropriately when released from the hospital.

Officers learned Collins and other men entered the business on South Claiborne, tied the victims with rope and robbed the business. Then Collins stole one of the victim’s cars- the silver Nissan Altima- and led police on a chase. The other suspects fled the scene.

Brandon Collins was previously arrested for Traffic and a Warrant.

The Officer involved in the incident will be administratively reassigned, pending the investigation.

Sergeant Nicole Barbe of the Public Integrity Bureau Force Investigations Unit is in charge of the ongoing investigation.

The Independent Police Monitor was on scene and will conduct its own independent review into this incident.

One Response to “NOPD: Robbery suspect shot by police “turned towards the officer in a suspicious manner””