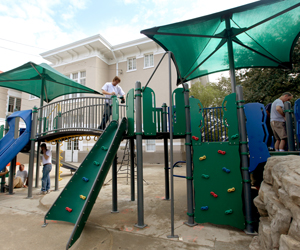 Lusher Charter School is likely to reduce the number of incoming kindergarten students from 150 to 100 in the coming year, halting the expansion it began two years ago because it has run out of room at its satellite campus at the Jewish Community Center and been unable to find more space elsewhere.

In the fall of 2010, Lusher expanded from its traditional four sections of kindergarten at its Willow Street campus to six by adding two classes at the Jewish Community Center. The school now has four classes total at the JCC — two of first grade and two of kindergarten — but no room to add another two classes, said Lusher CEO Kathy Riedlinger at a Saturday morning meeting of the school’s governing board.

Riedlinger said she has explored a number of possible locations, most notably the Our Lady of Lourdes school building on Freret that Sojourner Truth Academy will vacate when it closes at the end of the year. The Archdiocese appears likely to hold on to that building for one of its own schools next year, however, so Lusher has run out options, Riedlinger said.

The four sections at the JCC will stay there as they rise to first and second grade, Riedlinger said, but next year’s incoming kindergarten class will return to the four sections of 25 students each that it had prior to the expansion effort.

“It looks like we’re going to be holding what we have from this year,” Riedlinger said.

Every grade at Lusher has a waiting list, and exactly how the reduced number of kindergarten classes will affect admissions is not clear. Lusher gives first preference for kindergarten admissions to siblings of current students and children who live in the small attendance district around its Willow Street campus, and splits the remaining spaces in half between children of Tulane staff and children from the wider community, according to an agreement signed with Tulane after Hurricane Katrina and renewed in late 2011. Riedlinger did not specify the number of incoming kindergartners in each category for the coming year.

“This is how we’ve done it for years,” Riedlinger said.

If no space can be found this summer, the search will continue next year, Riedlinger said, in hopes of resuming the expansion in following years.

Meanwhile, discussions continue with the Orleans Parish School Board over the scope of stabilization efforts to the school’s two existing buildings. Riedlinger and board chair Blaine LeCesne said they hope work will begin on the plans for the refurbishments this summer.

To read our live coverage of Saturday’s meeting, click in the box below.