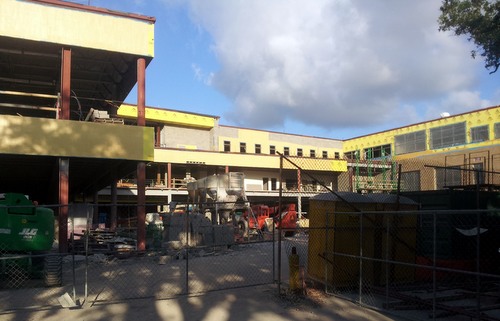 Ongoing construction at the Crocker Arts and Technology School on Marengo Street in the Milan neighborhood. (Robert Morris, UptownMessenger.com)

Encore Academy, the newest charter school to open in Uptown New Orleans, will spend its first year in the “brand new, state of the art” building under construction for Crocker Arts and Technology School in the Milan neighborhood, officials said Tuesday night.

The agreement reached Saturday with the Crocker board represents at least a one-year solution to the major hurdle of finding a home for the new charter school. Encore officials are now working with their counterparts at Crocker on specifics of the arrangement, such as start times for the two schools and how common spaces and buses will be used, and the schools have considered creating a joint committee to handle those issues during the school year, said Encore school leader Terri L. Smith at a Tuesday night meeting of the Encore board.

“It’s the spirit of cooperation — if people want it to work well, it will,” Smith said. “Since we have similar populations and similar programming, it’s a good match.”

Space is not expected to be a problem, as the building is intended to accommodate more than 600 children. Encore hopes to open with 220 students — two 25-student sections in each of four grades, and one 20-student pre-kindergarten class — and Crocker has about 230 students at present, leaving ample room for both populations. Many of the large spaces, such as the theatre and the gym, already have dividers in them, making them easy to share, Smith said.

With a location now in hand, Encore plans to begin a more aggressive recruiting effort to attract students, building on the 47 that have already been accepted, Smith said. She is beginning to make local talk show appearances to describe the school’s focus on music training and individualized instruction, and staff members have hung 2,000 door hangers in the neighborhood around the school. The only class with a waiting list is pre-kindergarten — and the school will add another pre-K section if state funding is approved — but vacancies are available in kindergarten, first, second and fifth grades.

The school’s first meet-and-greet for parents will be later this month at the Atkinson-Stern Tennis Center on South Saratoga, only a block away from the school site, and more such events are planned through the summer. Smith and board chair Kesana Durand have now interviewed dozens of teacher candidates, and expect to begin making offers and filling most of the faculty positions this week, they said.

The board still must continue looking for a permanent home, though Smith noted that Crocker officials left open the possibility that the two schools could possibly continue sharing space for a second year, depending on circumstances that will be clearer later in the year. In the meantime, both schools are waiting for the late-summer completion of the new Crocker facility.

“We go by every day to check it out, and I’m sure they do too,” Smith said.