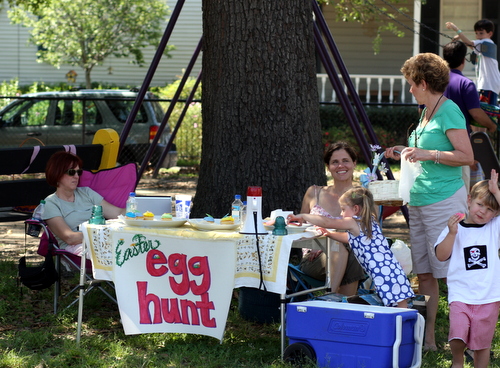 With a nest egg of unspent membership dues built up over the years, the Audubon Riverside Neighborhood Association has begun discussing possible projects to improve nearby parks.

This year’s board inherited an account balance of roughly $14,000 that accumulated in previous years and was never spent. The association’s annual expenses are not high, noted association president Sara Meadows Tolleson — primarily just paying for supplies at events such as the recent Easter egg hunt, the fall party and the National Night Out Against Crime — and mostly covered by people renewing their memberships each year.

A recent audit committee suggested that ARNA spend part of the money on a neighborhood project, rather than keeping such a relatively large balance indefinitely. Over the last month, the association used a new online voting tool called VoteIt (developed by neighborhood resident Taylor Beery and funded with an $800,000 investment) to solicit and vote on ideas for the project. Of the 197 paid members of ARNA, the association has working emails for about 150, and about 40 percent of those voted, Tolleson said — joking that it was better turnout than in the recent City Council election.

Leading the votes was replacing the swing set at Alma Peters Park, but several issues have arisen with that choice. Much of the maintenance and cleaning at the park is already done by neighbors, not the city, and the association board worried that the city might simply remove any equipment that the neighbors install, so for the time being that choice is on hold. Another option that has been discussed is replacing older, less attractive sections of the fence around Alma Peters Park, Tolleson said, and in general, interest is high in making improvements there.

“It is a very well-used park,” Tolleson said. “Someone called it ‘the commons of the neighborhood,’ and it’s kind of true.”

The association also considered applying for one of the city’s new “Love Your Block” grants for a project at Alma Peters Park, but decided instead to focus that effort on a new bench at Gilmore Park, the smaller park at State and Laurel. The second place vote-getter on VoteIt was an attempt to create a dog park, Tolleson noted, and that may be another project worth pursuing.

With the association members’ first choice out of contention for now, it may be worthwhile to hold a second round of voting, said association vice president Tim Betbeze. The VoteIt exercise was useful, Betbeze noted, because it helped identify members whose email addresses had gone out of date, and continuing to work out those kinds of kinks will be helpful the next time a more controversial neighborhood issue arises.

Johnny V’s
Tolleson and Betbeze also gave a brief update on the temporary opening of Johnny V’s, which is operating under a temporary occupational license while it meets the final conditions the city imposed on it. After Tolleson and Betbeze met Monday with City Councilwoman Susan Guidry, Tolleson contacted restaurant attorney Justin Schmidt to determine whether the final issues left to negotiate in the good neighbor agreement can be resolved.

Bylaw changes
The association board has been considering changes to their bylaws, and will hold a special meeting at 6:30 p.m. April 10 to vote on the proposed changes. More information is available at the association website, audubonriversideneighborhood.org.