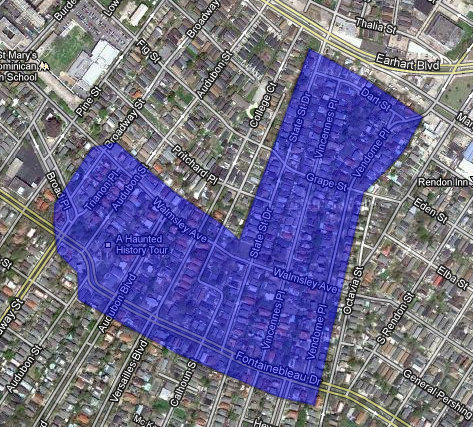 The proposed Upper Marleyville Security District would run along both sides of the street along Vendome Place, State Street Drive, Walmsley and Fontainbleau. (map via google.com)

A second meeting to discuss creating a new tax on homes along several Fontainebleau-area streets to hire additional security patrols did little Thursday night to bridge the divide between the idea’s strongly committed supporters and opponents.

Most of the 30 or so residents who attended seemed to leave the meeting with the same opinions they brought. Some see a security district as an obvious safety measure for crime-weary residents, while others view it as an expensive burden with no measurable results.

The proposed Upper Marlyville Security District would run along Vendome Place, State Street Drive, Fontainbleau and Walmsley, placing a new fee of up to $400 on property-tax bills that would then fund the hiring of private security guards or off-duty police officers to patrol the streets. The district will have to be approved by a majority of voters in its boundaries before it is created.

Kristri Trail, one of the organizers of the effort, described a litany of criminal offenses she has been subject to at her home in the last five years. Her house has been broken into five times, and she once witnessed a drive by shooting on her street while holding her 1-year-old child in her arms. More recently, a neighbor’s parked car was sideswiped by a driver who then stalled out down the street, giving the victim ample time to call 911 — but police didn’t arrive for 30 minutes, and the culprit had gotten away.

“If there was some extra presence, maybe they would have got the guy,” Trail said.

Some of her neighbors, particularly on State Street Drive where the opposition seems strongest, were unconvinced that a security guard would have helped. Moreover, the real problem is not that Fontainebleau is under-patrolled, but that the city police department is grossly understaffed, said Col. James Sehulster. Instead of creating more security districts, the city should do away with them all and raise property taxes to hire enough full-time officers.

“I think we’re putting a Band-aid on a gaping chest wound,” Sehulster said of the security district.

Many of the opponents said the current proposal won’t accomplish what the organizers promise, namely, 24-hour patrols. They count 340 parcels in the district, and a fee of $400 apiece will be insufficient to pay for a full-time officer, they say.

For Debbie Brockley, however, any increase will be an improvement.

“I don’t need statistics to show me,” Brockley said. “My common sense says, having more is better than having less.”

Jean Hopkins of Vendome Place said that she owns rental property in the Twinbrook Security District, and was initially opposed to that tax, since she didn’t get to vote on it. Since then, however, she’s found the patrols to be a “great marketing tool” for prospective renters worried about New Orleans’ infamous crime. Further, the residents in Twinbrook have been so pleased with the service that they’ve gradually increased the number of patrols, Hopkins said.

“It made a visible difference to those people in those area,” Hopkins said. “I’ve seen the benefit of it, and it works.”

Sheila Danzey of State Street Drive countered that she has already invested in expensive security measures, such as cameras, and doesn’t want to be forced into paying for a service she doesn’t support. The security district amounts to “taxation without representation,” especially since her property taxes already pay for the police department.

“I don’t come to your house and spend your money, and I don’t want anyone to come to my house and spend mine,” Danzey said. “I feel like I’m taxed to death. They want to tax us out of the city.”

Proponents of the district have offered to amend the bill to come up with a best fit for neighbors’ wishes, such as removing blocks that don’t want to be included, changing the governance of the district, or altering the fee or the number of hours of patrols.

“This is very far from a done deal,” said Scott Barron, president of the Claiborne-University Neighborhood Association. “The process of adjusting this is now.”