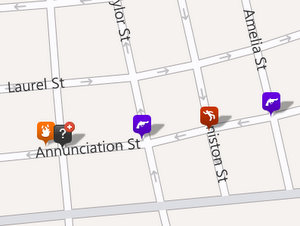 Shootings, gunplay and a homicide along a few blocks of Annunciation in June, August and October in an otherwise tranquil Uptown neighborhood. (via nopd.com)

A persistent pocket of violence along Annunciation Street flared again this weekend, when a man fleeing a shootout in the 3700 block was struck in the foot by gunfire, police said.

The victim was sitting on a vehicle just before 7 p.m. Friday when a stranger began shooting at a number of people sitting on a nearby porch, and as the victim turned to run, he was hit in the left foot, police said in an email alert Monday. The suspect is described as a black male of average build, between 18 and 21
years old, wearing a tan shirt and dark pants.

Gatherings of gun-toting men along that corridor were the subject of complaints by neighbors in June, and Second District officials ordered extensive surveillance by undercover police but turned up no credible leads. A teenager was shot to death there in August, but his death has gone unsolved. The violence in those blocks stands in stark contrast to the surrounding neighborhood, where only two other incidents of gunplay have been recorded in the last six months in a broad swath between Napoleon and Louisiana avenues.

Anyone with information about the case is urged to call 658-6020 or, to leave an anonymous tip that could be eligible for a cash reward, call CrimeStoppers at 822-1111.

3 Responses to “One wounded as gunfire returns to Annunciation Street”