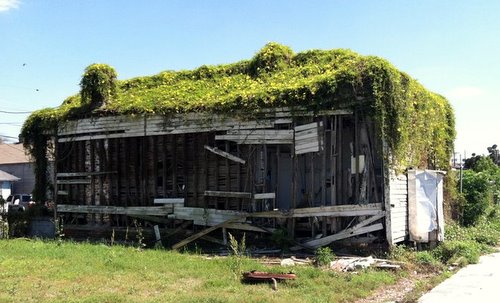 One of the most intriguing blighted properties in the city, on Simon Bolivar Avenue (photo by Jean-Paul Villere)

Two weeks ago I wrote a piece contrasting the Hornets “I’m In” campaign to the city’s “Fight the Blight” with mixed responses.  And that’s to be expected.  Along with this, recently the city facilitated yet another round of tax sales for delinquent property owners in Orleans Parish, and some of these properties are, yes, blighted.  By city ordinance, a successful bidder on a tax year for a property is entitled to a certain percentage of ownership of that tax year for that property.  Depending on the outcome and competitiveness of the bidding process some times that ownership is 100% and other times as little as 1%.  It gets more layered, so stay with me.  On paper, the goal of the tax sale is to get these properties righted on their parish debt and back into commerce, whether through a prescriptive period of delinquency and subsequent sale or the offender’s righting of their own tax debt themselves.  If the property is not deemed blighted the prescriptive period is 3 years, and if it is blighted it’s cut in half to 18 months.  This all seems relatively simple and plainly spelled out, right?  It is, kinda. 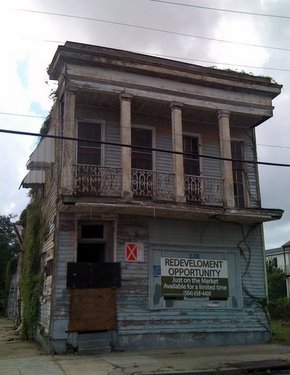 An opportunity on O.C. Haley Boulevard (photo by Jean-Paul Villere)

In addition to other comments on my previous article I was not surprised to receive criticism for my lack of physical involvement in this very same “Fight the Blight” day.  It should not be misconstrued that lack of physical involvement translates into no involvement.  I’m in real estate, am a licensed broker with the state, and actively invest in my neighborhood and the city, and tax sales are no exception.  And I think tax sales provide a great service as a means, but as to their eventual and uncertain end, it can discourage anyone – even the most seasoned investor – from pursuing them.  It is a lengthy process even if acquisition is successful.  But let’s say too you successfully bid on something and the delinquent party redeems their property.  In theory a bidder should be reimbursed within a reasonable amount of time, right?  Say 30 days?  Well, we’re dealing with the City of New Orleans, folks, not a Sears rebate.  Sometimes it can happen in no time, other times 18 months, and in one specific case my wife has physically gone down to City Hall not once but twice, and each time she was reassured the check was in the mail.  Only, we’re still waiting.  Still.

But wait!  There’s more!   Sluggish reimbursements aside, 2011 saw a game changer in the arena of blight discourse and from the state level: ACT 275.  A host of state reps and senators added that a successful bidder may be reimbursed per tax year no more than $3,000 for blighted property and $1,500 for abandoned.  And when this was brought to my attention, the needle came scratching off the record to silence.  My first response was: why?  And I took this response to those that composed this modification.  I individually emailed each lawmaker, asking each why, even getting a little Twitter action in.  Frankly I was surpised by the results.  Rep. Brossett called me that afternoon, and we chatted.  Two days later Rep. Badon phoned me up.  Meanwhile emails were exchanged with Reps. Leger and Abramson.  And Senator Willard-Lewis’ office professed to provide me the history of the law and a dialogue with the drafter of this most recent addition though I’m still waiting on that to materialize.  The remainder of the lawmakers never responded, and Rep Hines Twitter account says he’s out of the game and not running for re-election. 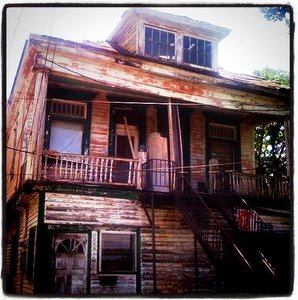 On the surface, this further imposition on the investor layers a level of discouragement, because for any blighted property $3,000 is a drop in the bucket and provides yet another backdoor for the delinquent owner to redeem their property by restricting monetary play from successful bidders.  More has to be done, and the law needs to be further changed.  The reimbursement cap needs to be raised or removed altogether.  Enough is enough.  The city has a brand on blight, and it’s time the conversation changed.  Because truly it is a conversation we all have all the time; it is old, it is tired, and the offending parties clearly have little to no interest in correcting what’s wrong.  Every neighborhood in New Orleans possesses some form of blight, and what’s that?  It’s election season???  Take this conversation to the polls and beyond.  As those seeking re-election ask you for your vote, maybe ask them in response, “When and how will state and local law be changed to eliminate blight, really eliminate it?” rather than coddling the delinquent.

2 Responses to “Jean-Paul Villere: The Plight of Fighting Blight (Redux)”