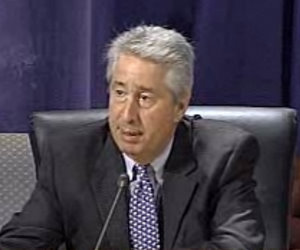 Councilman Arnie Fielkow thanks the applicants vying for an appointment to replace him on the City Council for six months until a special election can be held. (via nolacitycouncil.com)

A number of Uptown’s neighborhood leaders, former elected officials and residents form a majority of the candidates seeking a six-month appointment to the New Orleans City Council, until an election is held to replace resigning Councilman-at-Large Arnie Fielkow.

On Thursday, 13 of the 16 people who have applied for the job appeared before the council to introduce themselves, and their past or present roles in Uptown civic life were prominent in many of their their pitches:

Former state Sen. Diana Bajoie, who held the District 5 seat that covers most of Uptown prior to former Sen. Cheryl Gray Evans and current Sen. Karen Carter Peterson, said she applied after several community members asked her to. She greeted each current council member personally, including her own, Stacy Head, but emphasized her citywide work during her Senate career, such as contributions to the Superdome, New Orleans Arena and the New Orleans Convention Center. Bajoie also stressed her experience with “billion-dollar budgets” as vice-chair of Senate Finance committee, in light of the city’s upcoming budget debate.

“I have some ideas already in mind to address that deficit,” Bajoie said.

Paul Barron, a Tulane law professor and member of the Lusher Charter School board (and other civic groups), told the Council that he brings “unique qualities to the position.” He’s lived in New Orleans for 36 years and has a long career as a professional mediator and arbitrator, as well as administrative experience through various executive positions at Tulane following Hurricane Katrina, and has no desire to ever seek elected office.

“I know how to build consensus. I know how to work with people,” Barron said. “I think I could be a very helpful person.”

Barron is on sabbatical this semester and said he was sure he could make arrangements with the Law School dean for enough time to do the job next semester. Councilwoman Jackie Clarkson praised Barron’s work in the city: “Your resume precedes you,” she said.

Jennifer Eagan, an Uptown resident and attorney who made an unsuccessful bid for a citywide judicial seat last year, offered the Council her passion for the city, her “good feel for the pulse of the city” through her legal practice and her ability to understand the issues and forge compromises. She also had high praise for the current council members.

“I felt that this council has raised the bar so much for the city of New Orleans that that’s why there’s a room full of qualified applicants for this position,” Eagan said.

Fenn French, a business partner of former District A Councilman Jay Batt and current candidate for the District 98 seat in the state House of Representatives, mentioned his education at the Isidore Newman School as well as his career in international finance.

“I just want to help,” French said. “I will work hard and do the best I can.”

Ed McGinnis, an engineer and a Irish Channel community activist and volunteer coach, mentioned that he has already worked with each of the council members on various projects in the past six years. He said he has already secured both a leave of absence from his employer and permission from his wife to serve (as long as the term ends at the election). With such a short time frame for the appointment, McGinnis said, it is important that the person chosen be committed to continuing Fielkow’s work, especially on the New Orleans Recreation Department and its “long-term investments in our kids.”

“There’s a short time frame left,” McGinnis said, noting his familiarity with Fielkow’s staff. “That work has to continue. Six months is not the time to change course.”

Thomas Milliner, an attorney and president of Maple Area Residents, Inc., in the Carrollton neighborhood, mentioned his work on city-level projects through the Alliance for Affordable Energy. The council’s selection should have experience and knowledge of municipal government, such as the complexities of the various boards it governs and services that it provides, Milliner said.

“Whoever you choose, choose someone who can hit the ground running … and won’t have a learning curve to the council,” Milliner said.

Former District A Councilman Scott Shea mentioned his broad public experience, with service in the city attorney’s office and on the school board, as well as his involvement with multiple areas of the city, growing up in New Orleans East, going to school Uptown and living in Lakeview. He, too, noted the upcoming budget deliberations – as well as his prior service on the council’s budget committee.

“You’re in the middle of what promises to be a very challenging process,” Shea said.

James Singleton, who filed to run for City Council District B in 2006 but then withdrew, said he grew up in New Orleans East but has worked in Central City for the majority of his adult life, including at the Dryades YMCA. Though no relation to former Councilman James Singleton, he volunteered for him in the past, and he also helped evacuees in Houston following the floods after Hurricane Katrina.

“I’ve been a public servant all my life,” Singleton said. “I’m just ready to help out.”

Evan Wolf, a New Orleans resident since 1996, ran in 2007 for the statehouse seat eventually won by Walker Hines. After this year’s redistricting, he filed to run for the seat held by state Rep. Neil Abramson, but has since withdrawn. Wolf said that the higher-level political campaigns he has worked on (President, governor and so forth) never allowed him the opportunity to address people’s quality-of-life issues that he heard about as he campaigned on the streets, which would make the City Council a new challenge for him: “I’ve never gotten to see the policy side,” Wolf said.

Four other candidates also introduced themselves to the council Tuesday:

Eric Granderson, Fielkow’s chief of staff, offered his long behind-the-scenes career at City Hall and his lack of desire for a career in politics beyond the six-month appointment as his qualifications.

“I’m a known entity to most of you,” Granderson said. “I think the 30-plus years I have around here does have a value… I have no political aspiration, I never have, and I think it’s pretty safe I never will.”

Dana Henry, an attorney and lifelong resident of New Orleans East, pledged to put his legal practice on hold during the six-month term and said he wanted to continue Fielkow’s legacy.

“I think his level-headedness and his spirit of collaboration, his spirit of equity and fairness that we’ve all benefited from, should be continued,” Henry said.

David Payton, who formerly served as an interim council member for District D, said he understands the issues before the council.

“There’s a penance that you do for the progress that you make,” Payton said. “I am capable and ready to make those decisions.”

Sally Stevens, who said she has worked with both the music business and the Central City Renaissance Alliance, said wants to bring her experience in the city’s “informal economy” to the table during budget negotiations.

Three candidates who did not appear Thursday were Steve Barry, John Penny and Daniel Ring.

The applicant who is chosen may not run for the remainder of Fielkow’s term in March’s special election. The next step in the appointment process is for the City Council to make nominations at its meeting next Thursday, followed by a public vote, Clarkson said.