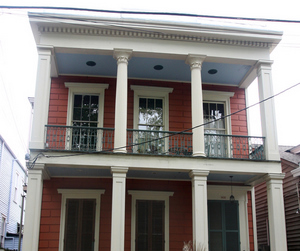 Amid concerns that a bed-and-breakfast proposed for a historic Constance Street mansion would have too great an impact on its neighbors, the Coliseum Square Association decided Monday night to back off its previous support for the project and remain neutral on the issue while surveying members to get a broader opinion.

Citing the need for additional income to help with ongoing renovations of the 1852 house built by noted New Orleans architect Henry Howard, homeowner Matt Ryan has proposed operating a bed-and-breakfast in several rooms inside the house. He originally conceived of four rooms — two in the house itself, and two in a side cottage that faces Euterpe — but has recently decided to make the side cottage a standard long-term rental after discovering city ordinances that place additional regulatory burdens on bed-and-breakfasts with more than two rooms, he said Monday.

The Coliseum Square Association enthusiastically endorsed Ryan’s idea in an April meeting but decided to revisit the issue Monday night after a handful of neighbors voiced strong opinions against the project. Ryan gave the association board a petition of most of his immediate neighbors supporting the project, and several attended the meeting to speak on its behalf. He said he intends to market his house to high-end travelers who will be good guests.

“I want this to be as low impact as possible,” Ryan said.

Ryan’s assurances did little to assuage the project’s opponents. The comings and goings of boisterous tourists at all hours of the night in a residential neighborhood is too much to ask them to bear, they said, dismissing Ryan’s insistence that he would control his guests’ behavior. Further, bed-and-breakfasts already proliferate through the neighborhood, many operating illegally, and neighbors worried that granting this request would weaken the association’s ability to oppose similar projects from property owners less scrupulous than Ryan, a former association leader.

“You let in one, you cannot stop the next one, because you have set a precedent,” said Mary Len Costa, who said she simply wanted the association to take a position of “No opinion” on such a divisive issue.

Andrew Yon, a former association president, noted that the board has chosen the “No opinion” route in the past to sidestep internal controversy, but argued that if the board members still personally support Ryan’s project, they should show that by voting for it. If they decided instead to revert to a neutral stance, Yon said, the board should at least attempt to survey the Coliseum Square membership, to give city officials who will decide the matter a broader idea of how opinions in the neighborhood actually run beyond the handful opponents who will inevitably show up to city meetings.

“We do not know how deeply this divide runs in the neighborhood,” Yon said. “For all we know, it’s just the four or five of you who adamantly oppose it.”

After about an hour and a half of discussion, the board opted for part of Costa’s suggestion and part of Yon’s, voting to rescind their previous approval of the project in favor of a “No opinion” stance, but also conducting an email survey of members to present to the City Planning Commission. Ryan said his project is slated to go before the city in November.