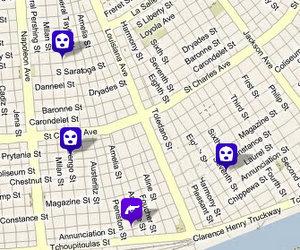 Tuesday's robberies on Loyola and Seventh may be the work of the same group of gun-wielding teens, police said Wednesday. They also resumed investigation of a case at Perrier and Marengo, and described a gun arrest they made amid their robbery investigations on Annunciation. (Map via NOPD.com)

Two more armed robberies were reported in the Milan and Irish Channel neighborhoods Tuesday night, but investigators believe they are nearing arrests in several of the more than 30 muggings in Uptown New Orleans over the last month.

Around 8:30 p.m. Tuesday, a man was walking home from a fast-food restaurant on Louisiana Avenue when he noticed a group of kids watching him from a house near Loyola Avenue, said Sgt. Chris Billiot of the NOPD Second District persons-crimes division. He turned down Loyola and noticed a teen following him for several blocks, and as the teen drew nearer, he turned around to confront him, but the teenager lifted his shirt and showed a gun in his waistband, Billiot said at Wednesday’s meeting of the Second District leadership.

The man took off running and as he looked behind him, he saw the teen now pointing the gun at him and demanding his money, so he threw his wallet in the air and kept running, Billiot said. He glanced backwards, and saw the gunman heading down Marengo Street toward the river, Billiot said.

About three hours later, a woman was walking in the 900 block of Seventh Street in the Irish Channel when three teens came running up from Laurel Street, according to a public-safety alert from the NOPD Sixth District. One of the teens had a gun and they robbed her of her wallet, cell phone and iPod before running off down Seventh, police said.

The woman was able to provide a complete description of the gunman, police said, a thin, 5-foot-9 African-American in his mid teens, bald or nearly so and wearing a yellow shirt with dark pants and a rosary around his neck. One accomplice had shoulder-length dreadlocks under a baseball cap, and the third she could not describe.

Based on the young age of the group, the close time and the proximity of the case to the teens the Milan victim saw on Louisiana Avenue, Billiot and Second District Commander Darryl Albert said there is a strong possibility they may be responsible for both cases, and possibly more in the area.

Meanwhile, investigators now believe that Antory Wooden, the suspect wanted for one of the first May robberies just off Oak Street, is likely responsible for four other cases as well: one at Dublin and Oak Street and another on Amelia from the same weekend, one on Robert and also the robbery and attempted shooting of a pizza delivery person on Cambronne Street, Billiot said. As they continue to seek the public’s help in finding them, the NOPD’s violent-offenders squad is also searching for him, Billiot said.

Finally, police reopened their investigation into a robbery at Perrier and Marengo that they had temporarily suspended, after the victims finally got in touch with them, Billiot said. The two victims were walking near the intersection when they were approached by a 6-foot-2 black man in his early 20s, with a tan shirt, black pants and dreadlocks, who demanded their money, Billiot said.

The Perrier/Marengo case is quite possibly tied to at least part of a rash of three robberies that took place May 18 in the same vicinity, Albert and Billiot said. The description fits, as does the gunman’s unusual habit of including niceties in his muggings.

“He’s polite robber,” Billiot said. “He’ll tell you ‘thank you’ and ‘have a nice day’ and all that.”

The saturated patrols of officers looking for robbery suspects led to a significant gun arrest last week, police said. About 6:30 p.m. Wednesday, June 1, police received a call about illegal gambling and drug use in the 3700 block of Annunciation. When they arrived, a teenager well-known to police for his frequent arrests took off running, Albert said, but enough officers were in the area that they were able to quickly surround the block and begin closing in on him. As he ran, he threw his gun over a nearby fence, and it landed literally in front of the feet of an officer arriving to help with the pursuit, Albert said. Police then found the teen and booked him on the gun charge, Albert said.

Some of the thefts have been particularly brazen, Albert noted. In one, a man walked into an auto-parts store, went to the rear, picked out a car battery and left with it, and in another, a man took a bottle of wine from a restaurant in almost the same way. At a house in Broadmoor, thieves removed two planks from a fence so they could steal a kiddie pool from the yard.

No matter the circumstances, Albert said he prefers residents let police handle such thefts instead of getting hurt over a stolen object.

“We don’t want somebody that’s untrained to take a chance of being a victim of being a persons crime because they tried to stop a thief,” Albert said. “What they can do is be a good witness.”

What residents can do, what investigators urge them to do, is begin locking their cars and taking their belongings, so officers don’t have to respond to so many auto burglaries, which are most often crimes of opportunity, Albert said. Of the 15 auto burglaries in the last week, exactly half were from unlocked cars, said Sgt. Warren Keller of the Second District property-crimes division: Seven victims knew they hadn’t locked the doors, and one couldn’t remember.

“I’ve got so many where the GPS are missing, the iPads, iPods, cell phones — I didn’t even know people left their cell phones in the car, but I’ve got a hell of lot of cell phones,” Albert said. “And, man, everyone is leaving their computer in the car.”

Joggers in Audubon Park occasionally leave their car keys in a wheel well because they don’t want to carry them while they run, another poorly thought-out idea, Albert said.

“It’s not Mayberry, it’s New Orleans,” Albert said. “If you don’t want to run with your keys, take that one key off.”

Even worse are the guns stolen from vehicles. In a presentation he’s been making this week, Superintendent Ronal Serpas has been showing data indicating that, of the last 84 guns stolen from vehicles, 41 were in unlocked vehicles, turning opportunistic car burglars into armed robbers. Albert, who formerly led the city’s SWAT Team before taking over the Second District, said even he takes all his guns out of his car and locks them in his house every night when he gets home.

The robbery investigation has led to one other casualty that many Second District residents may appreciate, however: the traffic checkpoints. Albert said word about the checkpoints spreads too quickly now, and they are no longer effective in catching actual criminals (though the city’s central traffic division may still use them for drunk-driving enforcement).

“Basically what we’re stopping is mom and dad coming home from work, instead of the thugs we’re looking for,” Albert said.

Instead, Albert said he has been devoting that manpower to saturating troubled neighborhoods.

One Response to “Robberies continue around Uptown, but investigators say they are nearing arrests”