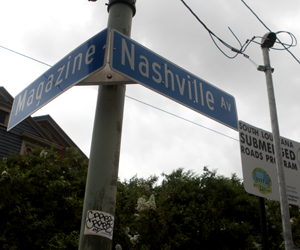 The third phase of repairs to Magazine Street could begin in just a few days by closing the block from Nashville to Arabella, officials announced at at community meeting Tuesday night to a surprised and frustrated audience of residents and merchants.

The $6.7 million Magazine Street repair project began in January at the U.S. 90 overpass, and is now in the final weeks of its second phase, which brought the work up to Napoleon Avenue. The third phase was slated to begin in July and, like the earlier portions, was not expected to result in the closure of more than one lane at a time, said project spokeswoman Meghan Weaver and construction manager Rick Hathaway to a crowd of about 40 people at Poydras Home for Tuesday night’s meeting.

The one exception was the block of Magazine between Nashville and Arabella, where a bus landing pad must be replaced on a stretch of street too narrow for the construction equipment to fit in one lane. Project officials just got word this afternoon that they could begin on that section, Weaver and Hathaway said, and thus planned to begin closing it Wednesday so they could start Thursday – a sudden start to the project that stunned some members of the meeting audience.

Richard Streiffer of Blue Frog Chocolates said he would have closed his store completely had he known, but that he can’t tell his employees not to come to work on such short notice.

“Obviously, they had to have known the plan for that block was to close it completely,” Streiffer said. “That didn’t just happen today.”

In response to these concerns, the contractor offered to put off the start of work on the block until Monday. Weaver said residents may seem some cones in the road starting Wednesday, but Magazine will not actually close until Monday. Further, one lane will be open at nights when work is not taking place.

The work on that block will proceed differently than the rest of the project. Workers will replace the bus pad, the sidewalks and the asphalt on the street all during the same week-long timeframe, officials said, to minimize the amount of time the street is actually closed.

“This is the only location we’ve identified where we think a full closure will be necessary,” Weaver said.

The rest of the project, where equipment can be kept within one lane, will start with the sidewalks at Nashville on the river side, proceed down to Napoleon, then come back up replacing sidewalks in the opposite direction, back to Nashville. After sidewalks are finished on both sides, then workers will do the actual street repairs, like starting at Napoleon and working up to Nashville. That process will like result in about five weeks of construction for any given block, officials said.

Residents said they appreciated the effort to do the closed block the most quickly, but still felt the notice given was insufficient.

“They’re not going to satisfy everyone, but they’ve got to give the businesses some notice,” said Robert Street resident Margaret Fernandez. “They can’t just say, ‘OK, now no one can access your business.'”