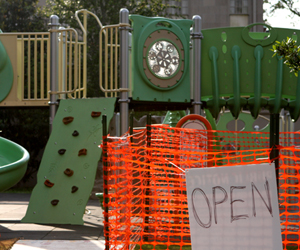 While part of the popular Danneel Park on St. Charles Avenue has reopened after lead remediation, another portion remains closed as the city finishes plans to combine the remaining lead treatments with a renovation of the playground equipment. Via an email distributed to the neighborhood:

The lead remediation was completed in a portion of the park, allowing the city to re-open the age 5-12 newer play equipment in the back portion of the play space a few weeks ago. The front toddler portion remains closed until further notice as Friends of Danneel Committee works through an agreement with the city agencies to renovate the front portion as was planned in 2010 as Phase 2 of the park’s renovation.

When the lead issue came to light, it became clear that it was best to coordinate the the removal of lead and the pouring of the new slabs for the renovation in order to save money and more efficiently achieve the goals for the playground. Representatives from the Committee met with city officials to coordinate efforts.

As it stands now, the slightly modified plans from before are being reviewed by the city agencies for approval regarding safety issues, tree protection and such. Once approval is received, the plans will be released to the neighbors for comment. Once started, the timeline from start to finish is estimated to be approximately 2 months. We will keep you posted as things progress.

For now, the newer portion is open for play. Enjoy!

Two notes of caution from the lead specialists:

Please discourage children from digging in the recently placed mulch around the trees. The mulch was placed there as part of the protection from the lead.

Please help keep the orange fencing in place and people of all ages out of that area as the lead has not yet been removed.