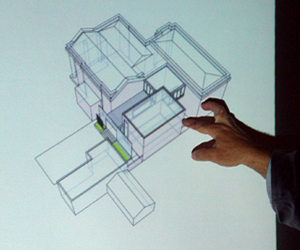 Architect Steve Dumez points to a slide showing a rendering of a two-story classroom building planned to replace a single-story building next to the historic pink house at Trinity Episcopal School. (Robert Morris, UptownMessenger.com)

Continuing a recent flurry of business activity around the Lower Garden District, residents Monday evening heard a film lot’s request to purchase a partially-closed road and a private school’s plans to demolish and replace one of its buildings.

Second Line Street | Susan Brennan of Second Line Stages told the Coliseum Square Association that film-production companies she works with keep a one-block stretch of Chippewa (between Richard and Market streets) perpetually closed with city permits to prevent access to their sets. It would make more sense, Brennan explained, for her to purchase the land herself so she could establish more reasonable and convenient arrangements of equipment on it, as well as build more secure fencing than the temporary barriers the city always brings.

“There hasn’t been any public access for three years, because every movie permits it,” Brennan says. “They don’t want people walking in and getting in their sets.”

Though Brennan said she does not plan to build on it, that traffic flow would not be affected and that immediate neighbors support the idea, Coliseum Square Association members were concerned about the long-term impact of letting go of a street. They asked Brennan to explore a long-term lease with the city, and to meet again with them with more details soon.

Trinity rising | Meanwhile, Trinity Episcopal School is planning to reconfigure one of its existing buildings, Canon Turner Hall, popularly known as “the pink house,” said architect Steve Dumez. The house itself will only need interior renovations, but a single-story cinder-block “lean-to” that is next to the historic house is slated to be demolished and replaced with a two-story classroom building, connected via a new terrace and balcony over the ground-floor walkways.

Association members were generally pleased that the renovation would primarily take place within the existing buildings’ footprints, but expressed more concerns about a proposed “screen” structure that would frame the entrance. Dumez explained that it was designed to help separate the historic structure from the modern addition, but said its appearance is far from settled and will be subject to extensive revision during the review process.

More incentive | Andrew Yon, a former Coliseum Square president, described a state program known as the Cultural Products District that provides substantial tax incentives for historic-preservation projects and tax-free sales of art in the neighborhood. Since qualifying for the program several years ago, the neighborhood has a duty to promote the tax incentives, but has done so very little since about 2009, Yon said.

Association members described a few projects to help property owners and art-gallery owners become more aware of the benefits of the program, such as creating a simple fact sheet that they could pass out.

Ongoing projects | Coliseum Square has heard a number of projects over the last few months and heard updates or new details on most of them Monday evening:

The meeting also included a visit from U.S. Rep. Cedric Richmond’s office and complaints about lack of police attention to trespassers in Coliseum Square after dark. To read a recap of our live coverage of the Coliseum Square Association meeting, click “Replay” in the box below.