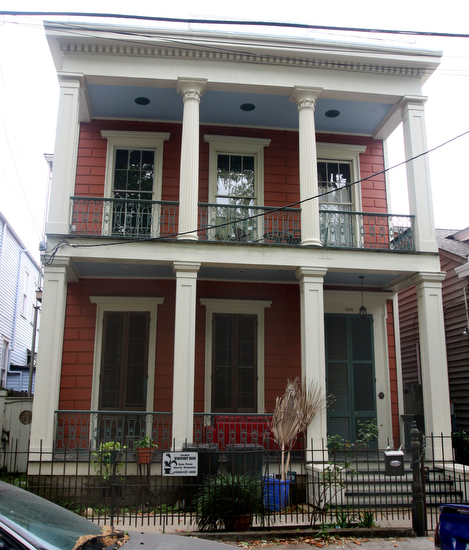 The owners of this home at 1431 Constance are seeking approval to operate a bed-and-breakfast. (Sabree Hill, UptownMessenger.com)

An antebellum mansion on Constance Street could become the Lower Garden District’s latest bed and breakfast after the neighborhood association gave the owner its blessing Monday night.

Homeowner Matt Ryan told the Coliseum Square Association that he spent about four years renovating the historic house at 1431 Constance, which was built in 1852 by noted New Orleans architect Henry Howard. Ryan has given previous consideration to operating bed-and-breakfasts in the past, and Ryan said he has decided that the income it would bring would help him defray the expenses of the renovation and the upkeep.

“If taxes go up or insurance goes up, we’re going to be in really bad shape,” Ryan said.

Ryan said he would live on the house’s third floor, leaving room for two suites downstairs and two in a small side cottage. Parking is available on a vacant lot on Euterpe, and all the neighbors he’s talked to have been in favor of the project, he said. The house’s zoning would allow a bed-and-breakfast if he receives a conditional-use permit from the city, but Ryan said he wanted the association’s approval before he began that process.

In years past, the association has limited bed and breakfasts to Magazine and Prytania, members recalled. But generally, residents said that all of the legally-operating bed-and-breakfasts with live-in owners have been excellent neighbors – it is only those operated from afar without city permission that tend to book loud, irresponsible guests with traffic all hours of the night.

“To be a legal bed and breakfast, there are a lot more hoops you have to jump through,” and those hoops tend to protect the neighborhood, said Coliseum Square Association president Frank Cole. “Here we have a chance to help a neighbor out, and it will have a relatively low impact.”

Some residents noted that if Ryan sells the house, permission to use it as a bed-and-breakfast will automatically be conveyed to the next owner. Ryan, however, said the he conceived the entire bed-and-breakfast idea to keep him in the house.

“If we wanted to sell, we’d just sell now,” Ryan said, adding later: “I really love showing off this place.”

Based on some neighbors’ concerns, an association committee may study a more general bed-and-breakfast policy that would examine whether limits on the numbers or areas of the neighborhood are needed. On Monday night, however, they voted unanimously to support Ryan’s request before the city.

Also at Monday night’s meeting
Uptown YMCA | David Ozmore of the Greater New Orleans YMCA presented the organization’s goals of reinventing itself to focus as much on youth development and social programs as fitness, and also gave further details on their expansion plans. The new Algiers facility will be in the old Federal City site and is expected to open this December, while the YMCA is conducting feasibility studies in the old St. Bernard projects in Gentilly and the old Mercy Hospital site in Mid-City.

Ozmore also elaborated on the possibility of expanding to Uptown, where the YMCA hopes to have a fourth full facility in the future. Uptown represents a “mature market,” with strong facilities at the Jewish Community Center and the Reily Center at Tulane, which creates higher fundraising hurdles for a new organization — in addition to the higher real-estate prices, Ozmore said (still noting that the former Borders book store on St. Charles Avenue would be a perfect site).

Cole suggested the former grocery store at Melpomene and Annunciation as a possible location. At a question from the audience, Ozmore said the Uptown site would not likely have an indoor pool, but more like an outdoor water park for children.

Architect’s office | The proposed architect’s office and condo building for the corner of Race and Magazine streets has “gone back to the drawing board” to reconfigure its parking garage, said developer Pierre Stouse.

Original plans for the project called for the two-story offices of Chenevert Architects fronting Magazine Street (with a third-floor apartment on top for the architect), and four individual townhouse-style condos with their own first-floor garages running along Race Street. The city’s Architectural Review Committee did not like the separate garages, however, so the developers are now trying to design a single-entrance garage on the lot that would accomodate four cars. The revision would restore most of the on-street parking on Race Street that the individual garages would have eliminated, but the tight turning radius on the lot is making the garage a design challenge, Stouse said.

Stouse promised to keep the association apprised of the changes. Association members, who supported the project before the city planning commission, applauded his presentation loudly afterward.

Office of neighborhoods | Cole described a recent meeting with the city’s new Office of Neighborhood Engagement as both “informative” and “vague.” On the surface, the office may be of more assistance to neighborhoods not as well organized as Coliseum Square, he said.

“There was some concern that it just adds another level of bureaucracy,” Cole said. “I’m open to it, but it’s not very well defined yet.”

Westley Bayas, a representative of the office, was in the audience, and replied that the first meeting was intended to gather input from neighborhood leaders, which may have caused it to seem vague. Part of the idea of the office, Bayas said, is to study the ideas of well-organized neighborhoods like Coliseum Square and share their work around the city, when applicable.

Cole pledged to keep working with the office, but suggested that at the next meeting, neighborhood leaders be able to take the handouts home.

School site | Association secretary Kathy Falwell gave a report on the plans for a temporary campus of the Audubon Charter School in the Lower Garden District, saying officials did not seem to have given adequate consideration to the massive amount of vehicles that occasionally come to nearby Second Line Stages for film production.

Graffiti and blight | The association is looking into paying for graffiti removal in Coliseum Square, and its blight committee is also putting together a “10 most endangered buildings” list to try to encourage preservation and redevelopment in the neighborhood.