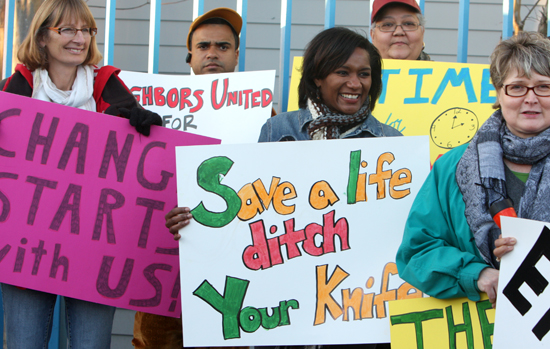 Milan residents protest against crime during a January march through the neighborhood with police.

During the most recent shootout, gunmen ran through the streets firing, darting inside one house to reload when they needed more ammunition. Residents of the Milan neighborhood took cover in their own homes, frantically calling police for help, and after the gun smoke cleared, they found 25 shell casings on the ground and pulled bullets out of five different homes.

This gun battle took place only last month, despite months of organizing, replacing broken street lights, creating phone networks among neighbors, taking action against abandoned properties and holding a very public march against crime. On Wednesday night, they gathered again, asking City Councilwoman Stacy Head and leaders of the NOPD Second District, what more do they have to do?

“The problems … are escalating and we have yet to see any proactive measures from the police to address these serious crimes,” the residents wrote in a letter they presented to police Wednesday. “We are tired of being afraid.”

The residents gave police a list of three homes in the neighborhood they said are central to the drugs and violence in the neighborhood, accompanied by a list of requests: Bicycle officers and mounted police. Walking beats. Surveillance vehicles. DUI checkpoints. Regular briefings with narcotics officers on the status of neighborhood cases, and police presence at neighborhood cleanups May 14 and May 21. Finally, they asked to be updated in June at an outdoor meeting in the 2100 block of General Taylor – the very block where the recent shootout took place.

The residents’ ideas and efforts drew praise from Head, who compared the Milan Focus Group to some of the city’s best-organized neighborhoods, such as Broadmoor. She encouraged residents to report to her office even the most minor infractions, such as illegally parked cars, increase pressure on the problem properties.

“What you’re doing is making this an inhospitable place to be a criminal,” Head said.

NOPD Second District Commander Darryl Albert told residents he has assigned roughly 30 hours a week of walking patrols to the Milan neighborhood over the last month. His surveillance vehicles have most recently been in Hollygrove after violence there, he said, but he will move them back. More bicycle officers are on the way, and DUI checkpoints are already planned for the neighborhood, he said.

Regarding the three houses of particular concern, Albert said police have investigated them in the recent past, but not collected enough evidence to get a search warrant. He vowed to return, however.

The two dozen or so residents applauded at points during Albert’s responses and praised some of the efforts made so far, but were persistent in requesting specific solutions.

“I think we’re all happy to hear that what we’re asking you to do, you’re already doing,” said resident Helene Barnett. “We’d like to respectfully ask if you bring it closer to our home, so we can see it.”

After the meeting, Lt. Mike Montalbano of the Second District investigative unit found the report on the March shootout, confirming the dozens of spent shells and bullet holes in homes. The responding officers said there were no witnesses to the shooting at the time, but Montalbano said the case is not closed. Detective Michael Dimarco is assigned to it, and can be reached at 658-6020.

To read our live coverage of the Milan residents’ meeting with police, click “Replay” in the box below.