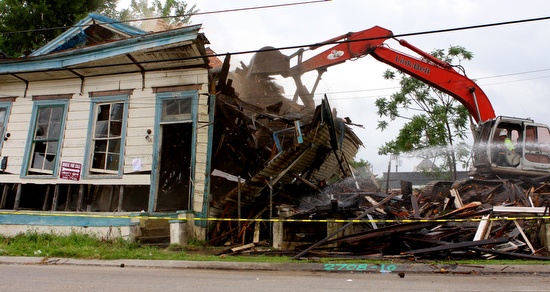 An excavator pulls down a blighted house at 2706 South Derbigny Street on Thursday afternoon. The blighted house was featured on a "Treme" season-one poster and DVD packaging. (Sabree Hill, UptownMessenger.com)

The clash between neighbors’ urgent desire to rid themselves of dangerous, derelict properties and the threat of destroying the city’s character in the process played out in public on Thursday, when the city demolished a row of blighted Central City homes used in the iconic poster for the HBO series “Treme.” 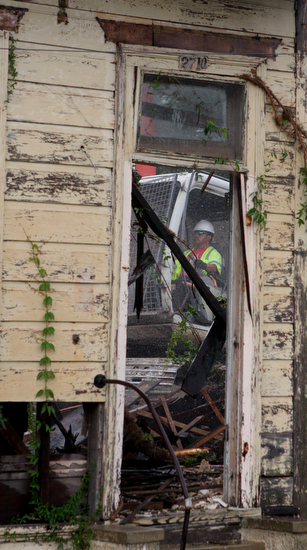 Contractors tear down another blighted house in the 2700 block of South Derbigny Street. (Sabree Hill, UptownMessenger.com)

Mayor Mitch Landrieu cast the issue as a choice between historic preservation and public safety, and said his decision to tear down the South Derbigny Street houses fulfilled a promise to Hoffman Triangle residents. Indeed, the residents told FOX 8 and WWL that the crumbling structures across from Taylor Park were havens for crime and an unsafe temptation for neighborhood kids.

Preservationists, however, said the properties are less desirable as vacant lots rather than as salvageable examples of the city’s unique shotgun architecture, and so will remain unused longer after demolition than if they had been sold. David Simon and the other producers of “Treme” sent a letter dated April 7 to City Hall asking Landrieu to work with preservationists to find a way to restore the homes, but the letter “sat unopened at City Hall for a week,” reported The Times-Picayune, until reporters’ inquiries prompted Landrieu and others to read it the morning of the demolitions.

Had the city been open to discussions, Simon said afterward, “Treme” had planned to contribute money to the homes’ restoration into affordable housing. The one outcome they did not expect, however, was being ignored by the city altogether. 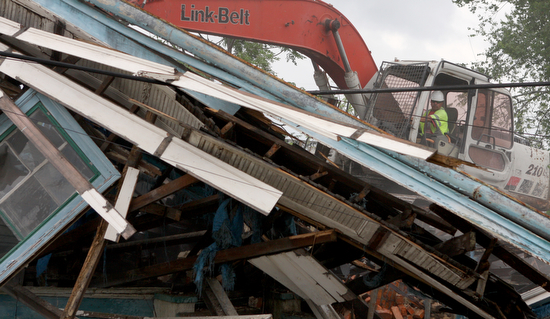 An excavator passes thrrough the remains of the 2700 block of South Derbigny Street. (Sabree Hill, UptownMessenger.com)