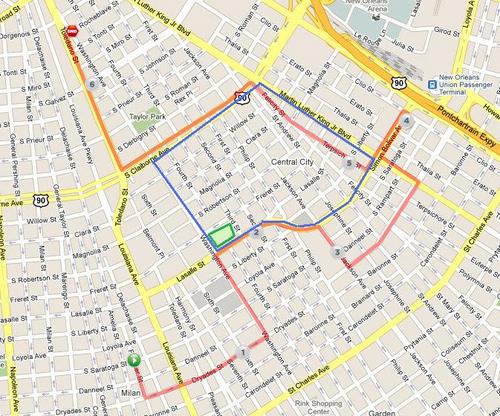 The Single Men Social Aid and Pleasure Club will second-line through Central City on Sunday afternoon in a route that will roughly follow the Mardi Gras Indians Council’s annual parade. The Mardi Gras Indians will begin their festivities at A.L. Davis Park at Washington and LaSalle at 11 a.m., and their parade will start there at 1 p.m. Accompanied by the Hot 8, Soul Rebels and Da Truth brass bands, the Indians will make a loop up LaSalle, Martin Luther King, down Claiborne and Washington back to the park.

With music by Stooges Brass Band, the Single Men will begin at 1 p.m. at the Other Place Lounge at Foucher and South Saratoga in Milan and continue into Central City with stops on Dryades, LaSalle, Jackson, Simon Bolivar, Terpsichore and Toledano before ending at Foxx’s Lounge at South Rocheblave and Washington. For turn-by-turn directions, see Red Cotton’s post for Gambit’s Blog of New Orleans.