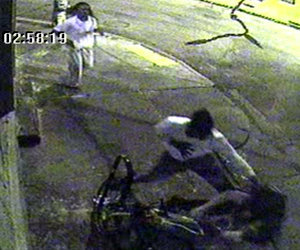 This image from a security camera shows a robbery in progress on St. Mary Street. The victim was shot and his cell phone was stolen, police said.

A woman was critically wounded in a gun battle in Hollygrove and a man was shot during an apparent robbery attempt caught on video outside a Lower Garden District bar in separate incidents Tuesday night, continuing the wave of bloodshed and violence across Uptown New Orleans since the weekend.

In the Hollygrove shooting, the victim was unintentionally caught in the crossfire during a gunfight between her brother and another man, said Sgt. Shaun Ferguson of the NOPD Second District persons-crimes division. She, her husband and her brother were all walking near Hollygrove and Palmer streets Tuesday evening when her brother called a woman he knew, Ferguson said. The woman’s boyfriend, Kalumba Cheneau, became angry about the call, and he and the brother exchanged words about it over the phone, Ferguson said.

Her husband carried her to a nearby house for help, and Cheneau continued firing on them until he apparently ran out of bullets, Ferguson said. The brother then began chasing Cheneau though the streets firing at him, and police heard the continued gunshots even as they arrived to help the wounded woman, Ferguson said.

Amid the ensuing search for Cheneau, a plainclothes detective was knocking on the front door of a house when Cheneau emerged from the backyard, where he had apparently been trying to enter from the rear, Ferguson said. He didn’t initially recognize the detective as a police officer, and the detective was able to capture him quickly, Ferguson said. Cheneau had a revolver and a box of bullets in his pocket, and a bullet wound clean through his thigh, Ferguson said. He was arrested charges of attempted second-degree murder and possession of a firearm by a convicted felon.

Though police were initially concerned that she might not survive, the woman’s condition improved Wednesday from critical to stable, said Lt. Mike Montalbano of the NOPD Second District. Her brother has yet to be located, likely because of his role in the shooting, Ferguson said – at least 10 .40-caliber rounds from his gun were found on the scene.

In the Lower Garden District robbery, a man who had been inside The Saint bar on St. Mary Street for karaoke walked outside to use his phone about 3 a.m. Wednesday, when he was approached by two men, said Lt. Jeff Walls of the NOPD Sixth District. The men attacked him and in the ensuing struggle shot him, then stole his phone and ran off, Walls said. The victim is recovering from the wound, Walls said.

Police are hoping surveillance video footage of the incident will help identify the robbers, Walls said. A similar robbery had previously been reported on Adele Street, though one of investigators’ prime suspects in that case was among the victims in the River Garden shootout Monday, Walls said. Police are also continuing to investigate the circumstances that led to the St. Mary Street robbery, Walls said.

“There are some discrepancies between what he (the victim) initially told us and what we see in the video,” Walls said. “It almost appears he may have called somebody to meet him.”

Tuesday night’s shootings follow a wave of recent gun violence in Uptown neighborhoods, and more details are beginning to emerge in those previous cases as well.

In Monday’s five-victim shooting in the River Garden development, at least one of the survivors had been returning fire, Walls said. The man, whose name Walls did not disclose, had gunpowder residue on his hands, and witnesses led investigators to an ice chest with a gun inside believed to belong to him.

Donald Brown, the man killed on LaSalle Street in a shootout Sunday night, may not have been the intended target, Ferguson said. Brown was at the Soniat Street intersection talking to one woman and another man was in a car nearby talking to another woman when they were approached by a stranger who began shooting in their direction. Brown was gunned down and died later in the hospital, but his friend had recently been released from jail, and investigators believe the gunman may have actually been targetting him, Ferguson said.

Finally, a shooting on Annunciation also at Soniat Street just a half hour before the LaSalle homicide appears to have been completely unrelated, police now believe. The victims, a man and a woman, had been at a party at a labor-union hall when a man who appeared to be intoxicated made a pass at the girlfriend, Ferguson said. The boyfriend intervened, an argument followed, and the couple decided to leave the party, Ferguson said.

When they got outside, they noticed the man behind them, and he immediately started firing, Ferguson said. One bullet grazed the back of the woman’s head, and the boyfriend was shot in both of his hands as he apparently tried to protect her, Ferguson said. They then drove themselves to the hospital for treatment.

No casings were found at the scene, which would suggest the shooter was firing a revolver with unusually accurate aim, police said, especially as only a handful of shots were heard. The party was open to the public, so no guest list has been recovered, and the club had no video surveillance, Ferguson said, though police are now hoping to find video at a nearby business.

Anyone with information about any of these shooting should call CrimeStoppers at 822-1111.