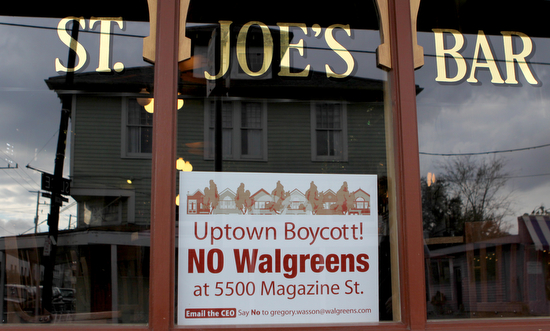 A sign encouraging an "Uptown boycott" to fight a possible new Walgreens sits in the window of St. Joe's bar on Magazine Street. (Sabree Hill, UptownMessenger.com)

In the window of St. Joe’s bar, across Magazine Street from the old American Legion building, sits a sign that reads “Uptown boycott! No Walgreens at 5500 Magazine.” 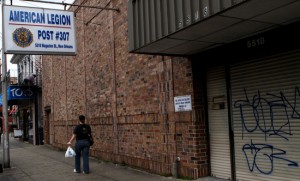 Standing across the street Wednesday afternoon, two co-owners of Slice restaurant leaned against the wall of the American Legion building during a shift change. One eagerly anticipated the parking that could be opened by a new store; the other acknowledged the economic benefit for the block but said he wished the new business was something more local.

Such are the range of opinions that have already formed for a project that has not yet been formally announced. The building’s developers, Stirling Properties, have said no tenant has yet been decided for the property, but many community members feel a decision has already been made.

Better information should be available soon. Peter Aamodt, vice president of development at Stirling Properties, is holding a private informational meeting with the presidents of three nearby neighborhood associations on Friday: Ray Cannata of Audubon-Riverside, Louis Gertler of Hurstville and Karen Duncan of Upper Hurstville. Taken together, the three groups represent a swath of Uptown that runs roughly from the river to St. Charles Avenue, between Jefferson Avenue and Audubon Park, and Aamodt said Wednesday that he will be seeking their recommendation on how best to proceed with presenting options for the property to the neighborhoods.

Judging from the signs in the bar window and cropping up in a few yards around the property, some opposition will be fierce. The possibility of a Walgreens in the American Legion building was raised during a recent public meeting about the nearby Romney Pilates project, drawing a sharp and critical reaction from many of the hundreds of attendees there. 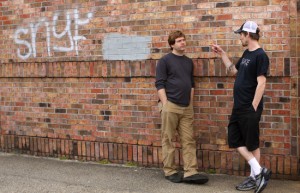 But opposition will not be the only reaction, not even from the building’s closest neighbors. The Slice co-owners, Warren Chapoton and Jay Morris, showed a split between barely-tempered enthusiasm to reluctant acceptance.

“There’s already a lot of Walgreens in New Orleans — I wish it was something that fit a little more with the streetscape,” Chapoton said, suggesting a deli, for example. “But what do you do? Having nothing going in is worse than having a Walgreens.”

“Opening up the parking lot back here is huge,” replied Morris. “Just getting this into commerce is going to be great.”

While Chapoton and Morris traded ideas about the building, Patrick Brower of Dirty Coast walked by. He described himself as on the fence about the pharmacy, as the parking lot might help the congested neighborhood, but the new cars the pharmacy brings might overflow it. If Walgreens does not restrict the parking, that could win a lot of goodwill, he noted, especially as it would clean up a graffiti-covered brick facade out of character with so many other recently-renovated buildings in the block.

“We have a serious issue with parking in this neighborhood,” Brower said. “But I’m not going to be a nimby and say, ‘Not in my backyard.'” 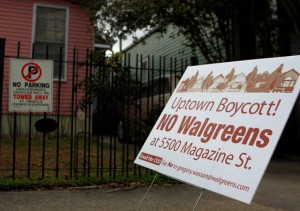 The owner of St. Joe’s bar could not be reached Wednesday or Thursday. A patron sitting inside Wednesday evening said a boycott appealed in principle, but might be hard to practice.

“Walgreens provides jobs, but it also kills small businesses, which is terrible,” said Srdjan Smajic, a native of Serbia who moved to New Orleans 10 years ago. “Unfortunately, I can’t afford to shop anywhere else. I’d love to say ‘yes’ (to the boycott), but right now I can’t say that.”