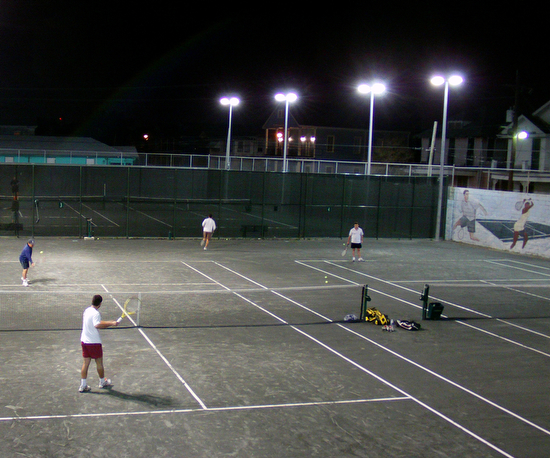 Bright lights over the courts at the Atkinson-Stern Tennis Center illuminate the surrounding streets well after dark. (Robert Morris, UptownMessenger.com)

It seems like such a simple request: Shed some light on the dark, dangerous streets that criminals use as speedways through the Milan neighborhood.

Gathering for their third month, a group of Milan residents determined to retake control of their neighborhood said Thursday evening that nightfall on some unlit blocks brings a total blackout that provides cover for crime. Getting some streetlights turned on, however, has proven a more difficult task than they expected.

The residents’ first hope was that the bright lights at the newly reopened Atkinson-Stern Tennis Center on South Saratoga could be left on all night. The courts take up most of a block, and the strong floodlights that allow tennis matches well after sunset also shine on the surrounding streets outside the center’s walls. Those same streets have been host to drug dealing and a notorious Easter Day murder, and after the tennis center closes at night, the entire area plunges into darkness.

“We feel like our streets are being used as a getaway route,” said neighborhood resident Jennifer Holden. “No street lights, no stop signs.”

After a meeting with the tennis center’s board earlier this month, however, Milan resident Helene Barnett reported back to her neighbors in the nascent Milan Focus Group on Thursday that it appears keeping those lights on will be out of the question. The cost of keeping them on overnight is more than the center can bear, Barnett said she was told.

The next best course, Barnett reported, may be petitioning the city to encourage Entergy to install lights on some of the streets. Barnett said that she’d been in conversations with City Councilwoman Stacy Head’s office and Entergy all day, and was optimistic that the conversation was moving in a direction toward street lights.

“That will make a big difference, even if we can get normal city street lights,” Barnett said.

The lighting issue is only a first step for the group, who are being assisted in organizing by staff members from the nearby Freret Neighborhood Center. Some members, like Linda Compton, are longtime Milan residents who can rattle off affiliations in numerous now-defunct neighborhood improvement groups in the area, while others, like Jennifer Holden, have moved to the area recently and see tremendous potential in the neighborhood bounded roughly by Napoleon, Louisiana, Claiborne and Dryades. 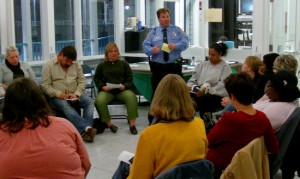 Representatives from the group have turned out for the past two monthly community meetings of the NOPD Second District, presenting officers with hot sheets and a written list of requests from the department. The Second District returned their interest in kind Thursday, sending a narcotics sergeant, a community-outreach coordinator and two quality-of-life officers to help forge a working relationship with the group.

Police have built cases that led to warrants to search about a dozen homes in the Milan area so far this year, said Sgt. Sammy Palumbo of the NOPD Second District narcotics division. In the Freret neighborhood on the opposite side of Napoleon, Palumbo said several residents allow him to use their personal security cameras to monitor their streets over the Internet. Several Milan members expressed interest in doing the same, especially when Palumbo said he doesn’t use the video as evidence which could later identify the homeowner in court – he only uses it to gather intelligence.

“It helps me identify who I need to be looking at,” Palumbo said, explaining that he investigates dealers of different drugs in different ways. “It helps to expedite what we’re doing.”

One of the group’s requests, for an anti-crime march through their neighborhood, will be filled in either December or January, promised Sgt. Robert Kirton. In the meantime, he encouraged them to come to this month’s march through Faubourg Delachaise at 5 p.m. Tuesday. It begins at Louisiana and Annunciation.

“We should go to theirs so they come to ours,” agreed resident Veronica Sharkey.

The crime in the Milan area, noted group member Allan Hegquist, does not seem to originate with the neighborhood’s residents. Instead, it seems to be people from elsewhere in the city who come into certain houses, and then “all hell breaks loose.” With the renewed determination of the growing group of neighbors, however, Hegquist said they should be able to push the criminals back out.

“This is our neighborhood and we’re going to keep it. We’re going to make it better,” Hegquist said, noting the renovations all around him. “I feel this area’s going to be a great place, and we’re not leaving.”

Eventually, group members said, they hope to move beyond their current focus on crime. At next month’s meeting, set for 6:30 p.m. Wednesday, Dec. 8, they plan to begin discussing blight in the neighborhood.